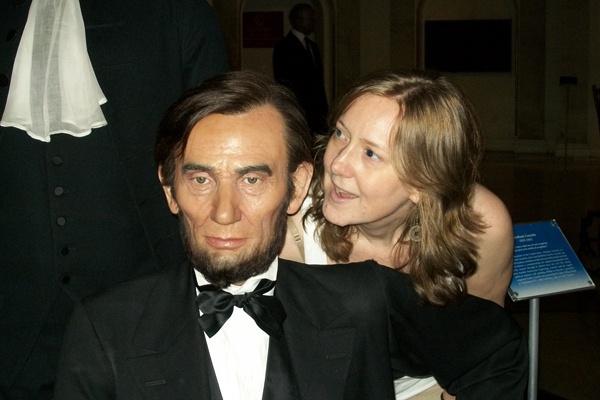 The Norwich Bulletin and The Day in New London reported yesterday that the city’s ethics commission found “probable cause to conduct hearings and launch formal investigations” into the way the Lincoln portrait competition was conducted.

The Day stated that

“Committee members [Charles] Arian, Marcia Marien and Joseph Sastre wrote that they did not believe [Vivian] Zoe [Slater Museum’s Director] “acted out of malice or for personal gain” but said the artists who did not get to display and offer their works for sale “have the right to feel aggrieved.”

Zoe could not be reached for comment. Meanwhile, the artists feel a sense of vindication.

You can read the full articles here and here.

Stay tuned as this story develops.


If you read my earlier post which explained the story behind the puzzle pieces, you know that I considered this an experimental piece…after all, I don’t usually make interactive pieces or installations.

The idea of a giant puzzle was born.

The puzzle was set up on a table, so that folks could gather around, and this made the piece more accessible and approachable. On a literal level, people could lean over it. On a psychological level, there was something friendly and maybe less threatening about having the artwork placed this way: it didn’t seem like a “difficult” abstract piece in a gallery; it seemed like a game table at home. People were encouraged to touch it and choose their own piece. The fact that there was a “hidden” painting underneath the puzzle pieces that would be revealed only by buying pieces also spawned some wild guesses and healthy competition about whose guess was right.

The fact that each piece is priced at just $15 also added to the fun. Everyone wanted to do something to stand up to gay bullying, and the price point made it possible for them to act on that wish. Not everyone could spring for a larger painting, nor does everyone have the wall space for that at home…but a magnet for their fridge or their filing cabinet at work…that was possible.

I was happy to hear people comparing pieces, asking others for their thoughts on which one was prettiest or most interesting. But they also shared their stories as they gathered around the puzzle table: people talking about being bullied themselves, about how they felt when they heard about the young teenagers who committed suicide. Although I deliberately spaced the teenagers’ silhouettes so that they were broken up over the borders of the puzzle pieces–to form a small abstract painting on each piece, but also to avoid the psychological weight of asking someone to place a portrait of dead child on their refrigerator–one woman asked for a piece with an entire silhouette. She said she wanted to remember these kids, wanted to be reminded of her commitment to take a stand against gay bullying, wanted to help.

That was the whole idea.

The opening reception of Lavender Menace: Paintings by Maura McGurk in Response to Gay Bullying was a success!

I was honored to have so many people in attendance; despite monsoon-like conditions, the gallery was full of steady foot traffic all night. Among the first visitors were mentors and mentees of True Colors, a non-profit organization that works with other social service agencies, schools, organizations, and within communities to ensure that the needs of sexual and gender minority youth are both recognized and competently met. It was great to talk with them about the projects they’re working on, and to answer their questions about my paintings.

Friends from preschool, middle school, college, and grad school came out to support me, not to mention family, and new friends made in Norwich. Thank you to all for your support!

The show is up all month, and there’s still plenty of time to make a visit to the gallery. You can find details here.

Don’t forget that the 10% deal is still on–I’ll be donating 10% of all proceeds from this exhibition to the It Gets Better Project! By purchasing an artwork, you’re taking a stand against gay bullying. And if you can’t make it to the show but still want to show your support, take a look at the online gallery and shoot me an email to make a purchase.

The ongoing exhibition, Lavender Menace: Paintings by Maura McGurk in Response to Gay Bullying, is covered in the Norwich Bulletin. Read all about it!

I’ve been inundated with requests to talk a bit more about the inspiration behind specific pieces…but almost as many people have told me that they enjoy just staring at a piece, and letting feelings wash over them as they try to figure it out.

So, this will be instructive for those of you who want to know more, and SPOILER ALERT for those who want to approach the artwork with a completely open mind.

This piece, called Love One Another, is a bit of an experiment.

Thematically, it’s a response to gay bullying, like the other works, and looks at the aftermath of suicides caused by gay bullying. After the suicides of gay teens in Fall 2010 which brought international attention to the bullying problem in the US, it became clear that this is an issue which touches many people. It Gets Better videos have been viewed millions of times; President Obama and Ellen DeGeneres, among others, have said that everyone shares a responsibility for taking a stand against bullying.

This idea of everyone doing their part is the inspiration behind Love One Another.

This artwork is made of 100 painted, magnetized puzzle pieces. Unlike other artwork in this show, the individual components here are designed to be removed from the whole, with each piece taking on life of its own as a small abstract painting. This shows that we all “hold a piece of the puzzle”, we all have a stake in this problem, and can each do something to help solve it.

To that end, each piece is affordably priced at $15 (and remember that 10% of proceeds go to the It Gets Better Project). Removing pieces and taking them home is a commitment to taking a stand against gay bullying. Posting them on the fridge or a filing cabinet is a daily reminder of the responsibility that we all share.

The image is made of silhouettes of real boys and girls who committed suicide because they were bullied for being gay, or because they were thought to be gay. This piece is deliberately colorful and attractive in order to highlight the positive action that we are all taking; although gay bullying is a weighty topic, I firmly believe that the artwork about it doesn’t have to be bleak or depressing.

There is a secondary component to this artwork, one underneath the magnetized puzzle pieces, which will be revealed as the puzzle pieces are taken away.

You are only one.
One is enough.
Take one.
Help one.
Love one another.

10% of proceeds from the Lavender Menace exhibition will be donated to the It Gets Better Project.
Keep up with the news from the gallery and read more about the exhibition here.