365 Days of Art: May 2 – Egon Schiele’s Friends Correspond While He Is in Jail 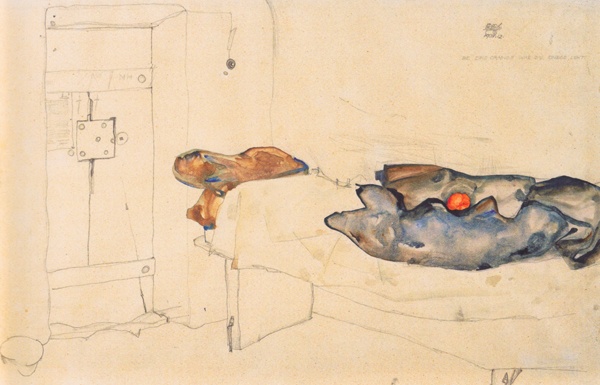 Egon Schiele, The Single Orange Was the Only Light, 1912

Egon Schiele’s friend Dr. Oskar Reichel writes to Arthur Roessler, informing him of Schiele’s imprisonment on charges of child molestation, abduction, and pornography, which comes to be known as the Neulengbach affair:

B. [Heinrich Benesch] visited him. He was imprisoned in Neulengbach and was in a dreadful state. There are miserable conditions there. Since then he has been taken to the district court at St. Pölten…He is not allowed to send or receive letters. Apparently people have taken exception to the fact that he had his drawings hanging up and probably showed them to schoolchildren. B. also has the impression that the judge is not favourably disposed towards him.

The Neulengback affair came about partly because Schiele’s neighbors disapproved of his lifestyle: his work was sexually explicit, he lived with a woman–a model, no less–outside of marriage, and he allowed neighborhood children to visit. He and Wally, his girlfriend, had previously been driven out of the small town where his mother was born due to similar complaints from neighbors.

Eventually, neighbors complained to the police, who confiscated over 100 drawings from Schiele’s portfolios and walls. The artist was arrested and jailed on the specific charge of seducing a young girl (though two weeks later, that charge, as well as abduction, was dropped.

The work above is a drawing of his prison cell.