365 Days of Art: May 20 – NY World Publishes Article About Augusta Savage’s Rejection Due to Racial Bias 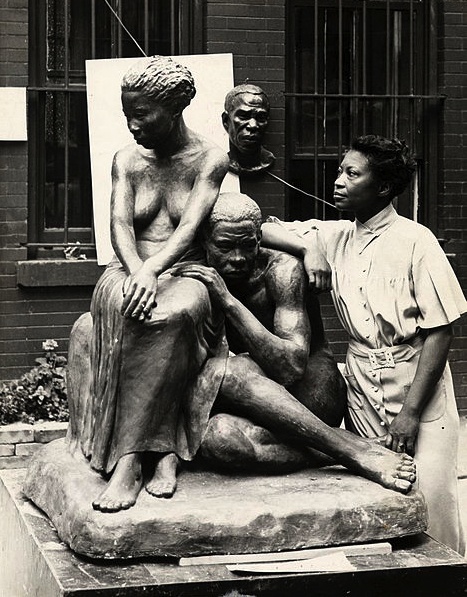 Augusta Savage, circa 1938, with some of her sculptures.

The New York World publishes an article on Augusta Savage, the artist whose application to a summer art program in France is denied because she is black.

The backstory: A summer art school in France offers grants for 100 American women to study for free in the program. Augusta applies, and the committee writes back and requests letters of reference. Before she can supply them however, her application fee of $35 is returned, and she’s told that she’s been rejected “with regret”.

When questioned, the artist heading the selection committee explains that Augusta didn’t supply the required references (remember, she wasn’t given the chance) but “frankly” felt this avoided a difficult and “embarrassing” situation for the “southern” girls (never mind that Augusta lives in New York City) since they would have to travel, live, eat and work with all the program’s students.

This shocking development (more shocking because black artists like Josephine Baker specifically found France to be more open-minded than America about issues of race in the 1920s) makes the front page of newspapers in New York. Publicly and privately, the committee is asked to reconsider its decision (it does not).

Augusta’s own words in The New York World article:

I don’t care much for myself because I will get along all right here, but other and better colored students might wish to apply sometime. This is the first year the school is open and I am the first colored girl to apply. I don’t like to see them establish a precedent…Democracy is a strange thing. My brother was good enough to be accepted in one of the regiments that saw service in France during the war, but it seems his sister is not good enough to be a guest of the country for which he fought…How am I to compete with other American artists if I am not to be given the same opportunity?