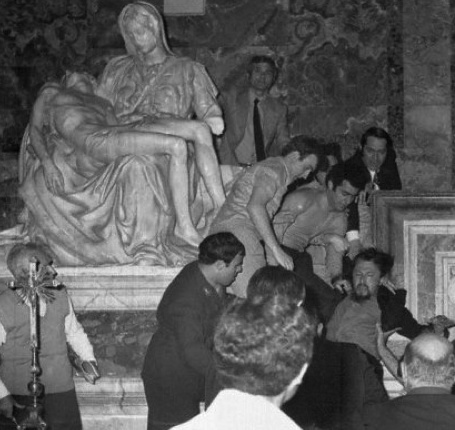 Laszlo Toth, an unemployed geologist, climbs onto Michelangelo’s Pietà, grabs a hammer from underneath his coat, and smashes away at the sculpture 15 times. A fireman and several undercover guards pull him away, while several civic-minded bystanders grab fragments of the statue that have fallen to the floor and run (to his or her credit, one guilty American mails back a stolen fragment several months later). When Toth is asked for his explanation, he gives a lot of mumbo-jumbo not worth repeating here, about it being his birthday, that he is Christ and Michelangelo and going to heaven.

Mary’s arm, left hand, and nose are broken off completely. It takes conservators five months to identify the 100 fragments (some as tiny as a fingernail). Due to the severity of the damage, as well as the beloved nature of the work, and its lifelike qualities, this is one of the most complex conservation projects ever undertaken. After debate about whether to leave the sculpture deliberately unrepaired, or to differentiate the conservation work from the original, it’s decided to conserve it in a way that’s invisible to the naked eye. Conservators build their lab around the statue in St. Peter’s, so they don’t have to move it.

Ten months and one bulletproof barrier later, the Pietà is returned to view. As for Toth, he vanishes while awaiting trial for the crime. He is allegedly seen at the Metropolitan Museum of Art, and after that, it is reported that he is arrested by the Yugoslavian government for photographing (e.g., spying on) a sugar refinery, for which he receives seven years of prison time.