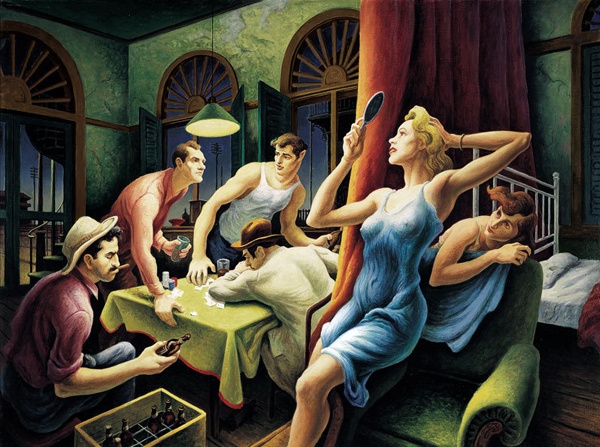 An interview with Thomas Hart Benton is published in the New York Sun. He sounds delightful.

[I am going to Kansas City] because since the depression [New York City] has lost its dynamic quality. On the upswing, New York is grand — when it is building buildings, tearing down buildings, making and spending money, its life is irresistible; and in its drive, it’s a grand show. But when it is on a downswing, it gets feeble and querulous and touchy. The place has lost its masculinity. Even the burlesque shows, which to my mind are the best barometer of the public state of mind, have lost all their uproarious vulgarity…Principles…that’s what the town has come to. It don’t act anymore, it talks. The place has gone completely verbal, and people are getting the idea that if they can make a sentence that is logical, they have demonstrated a truth.

Even the pretty young ladies who ought to have their attention concentrated in their legs address you with a “Do you or do you not believe?” — and look at you contemptuously when they discover you don’t believe anything. It’s a hell of a note when women, who can generally be counted upon to hold on to some human sense and not be fooled by language, begin to go the way of Harvard graduates…The Middle West has no inhibiting cultural patterns wrapped up in a lot of verbal logic, or tied to practice habits that stop action.

I’m leaving New York to see what can be done for art in a fairly clean field less ridden with verbal stupidities…Then, I’ve been here twenty-one years, and that’s too long for any American to stay in one place.

Do I think I’m going to escape stupidity in the Middle West? Of course not. Wherever people talk, idiocy thrives.