365 Days of Art: April 16 – Apollinaire Compares the Studio Habits of Picasso and Matisse 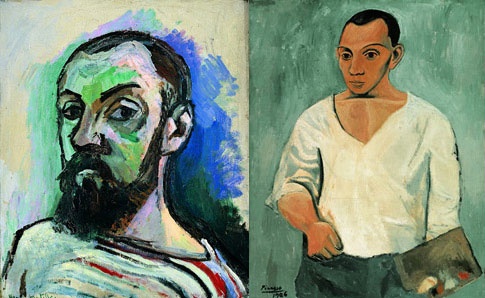 Matisse and Picasso self-portraits, both 1916

Apollinaire, the poet and friend of Picasso, writes in the Le Mercure de France about the differences in studio practice between Picasso and Matisse. These kinds of side-by-side comparisons stoked their professional rivalry:

On the contrary, Picasso, who is a Spaniard, takes delight in cultivating the disarray in his studio, where you see a jumble of Oceanian and African idols, anatomical pieces and a great deal of dust. The painter works there slowly, barefoot, and smoking a clay pipe. At one time he used to paint during the night…

The erudite Henri Matisse paints with gravity and solemnity, as if hundreds of Russians and Berliners were watching him. He works on one canvas for a quarter of an hour and then moves on to another. If anyone is in his studio, he indoctrinates them and quotes Nietzsche and Claudel, mentioning Duccio, Cezanne, and the New Zealanders as well.