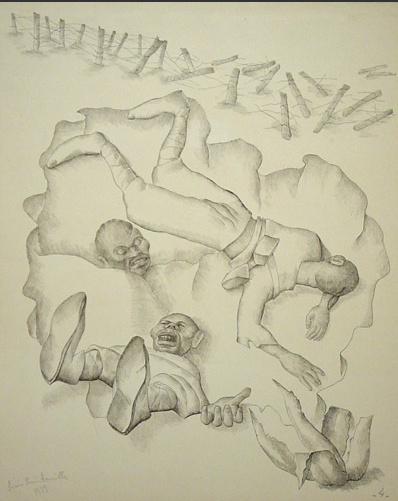 The exhibition Luis Quintanilla: An Exhibition of Drawings of the War in Spain, for which Ernest Hemingway wrote the catalog, closes at MoMA. Quintanilla was a distinguished leader of the opposition to the Fascists, director of the Republic’s intelligence services in the Basque country, and earned a spot on General Franco’s first black list, for execution in the bullring in Burgos.

Despite all these accomplishments, he was honorably discharged by the army because he was considered more valuable as an artist. He traversed the entire front line of the war in two months, and completed 140 drawings in another three. The drawings were exhibited in Barcelona, and at his friend Hemingway’s urging, at MoMA the following year. Hemingway’s catalog essay is typically pithy yet to the point:

A year ago today we were together and I asked Luis how his studio was and if the pictures were safe.

“Oh it’s all gone,” he said without bitterness, explaining that a bomb had gutted the building.

“And the big frescoes in University City and the Casa del Pueblo?’

“What about the frescoes for the monument to Pablo Iglesias?”

“Destroyed,” he said. “No, Ernesto, let’s not talk about it. When a man loses all his life’s work, everything that he has done in all his working life, it is much better not to talk about it.”

These paintings that were destroyed by the bomb, and these frescoes that were smashed by artillery fire and chipped away by machine gun bullets were great Spanish works of art. Luis Quintanilla, who painted them, was not only a great artist but a great man. When the Republic that he loved and believed in was attacked by the fascists, he led the attack on the Montana Barracks that saved Madrid for the government. Later, studying military books at night while he commanded troops in the daytime, he fought in the pines and the grey rocks of the Guadarrama; on the yellow plain of the Tagus; in the streets of Toledo, and back to the suburbs of Madrid where men with rifles, hand grenades, and bundled sticks of dynamite faced tanks, artillery, and planes, and died so that their country might be free.

Because great painters are scarcer than good soldiers, the Spanish government ordered Quintanilla out of the army after the fascists were stopped outside Madrid. He worked on various diplomatic missions, and then returned to the front to make these drawings. The drawings are of war. They are to be looked at; not written about in a catalogue.

There is much to say about Quintanilla, and no space to say it, but the drawings say all they need to say themselves.

This is me again. Check out the drawings one after the other. They really build in power as you go through.