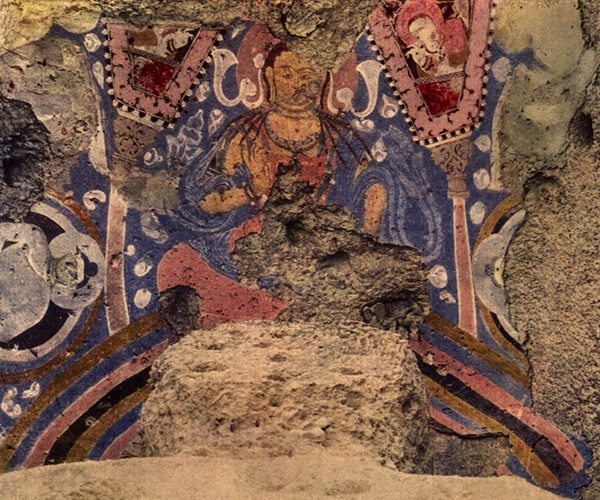 Scientists announce they have proved the world’s first-ever oil paintings were made in caves that were discovered behind, and after the destruction of, two giant statues of Buddha in Afghanistan.

Ironically, the dynamiting of the statues by the Taliban in 2001 revealed the caves and art behind them.

Scientists discovered that paintings in 12 of the 50 caves were created using oil paints, possibly from walnut or poppy. Samples from paintings date them from the 7th century AD, which is hundreds of years before oil paint was used in Europe.

It wasn’t until the 13th century that oil was first added to paints in Europe, and it wasn’t commonly used there until the early 15th century.

This is the earliest clear example of oil paintings in the world, although drying oils were already used by ancient Romans and Egyptians, but only as medicines and cosmetics,” said Yoko Taniguchi, leader of the team of scientists.

Bamiyan was once a thriving Buddhist center, a stop on the Silk Road trade route between China and the West. Monks lived in the caves carved into the cliffs by the two statues. The cave paintings were probably the work of artist-travelers on the Silk Road. The colorful paintings depict Buddhas with gorgeous crimson robes, as well as mythical creatures.