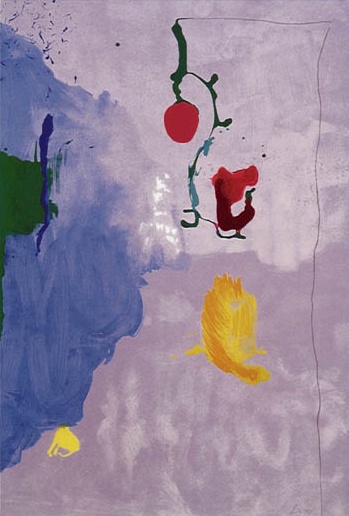 Helen Frankenthaler loved paper since she was a child, and worked on paper exclusively at the end of her life, for at least a decade. Like many artists, she found working on paper to be easier while traveling, and when studio space was scarce. But, she also worked on paper that was sized at 6 x 7 feet. The works on paper were often more opaque and dense than her well-known “bleeds” of watered-down pigment on canvas.

An interesting side note about women working in the man’s world of art in the 1950s and 60s (as Frankenthaler was): Frankenthaler was a good friend of the art critic Clement Greenberg. They moved in the same circles, and frequently went gallery hopping together. In conversation, he was quite enthusiastic about her work and invited others to look at it. But, in spite of their friendship, he only wrote about her once, and that was in the context of a 1960 article he wrote about two male artists (Kenneth Noland and Morris Louis). Her innovative painting techniques had inspired them to work in color field painting, yet that wasn’t worthy of its own article.

Frankenthaler was also once married to Robert Motherwell, one of my favorites.