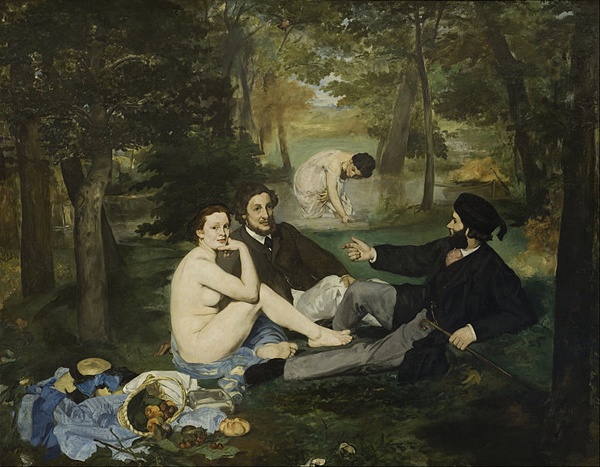 Emperor Napoleon III issues a press release, regarding the planned Salon des Refusés (literally, Exhibition of the Rejected Ones):

An exhibition will open on 15 May…Artists have until 7 May to withdraw their works…After this date works that have not been withdrawn will be placed on show.

Here’s the backstory: This statement, and the idea of the exhibition of rejected works, was formulated out of a sense of political fear on Napoleon’s part. The annual Paris Salon was a traditional, fairly conservative art exhibition that was presented each year, sponsored in part by the French government. Acceptance and praise from the Salon was essential for a successful artistic career. Private galleries had no weight at all.

This particular year, the Salon jury rejected two-thirds of the works presented to them, including work by such now-recognized masters as Courbet, Manet and Pissarro. The rejected artists and their supporters weren’t happy, and news of their protests reached the ears of the politically sensitive Napoleon. His office issued a statement saying:

Accordingly, the advertisement above was posted in the paper, giving artists a chance to opt out of the exhibition. Probably the most famous of the rejected works is Manet’s Le Déjeuner sur l’herbe (Luncheon on the Grass).