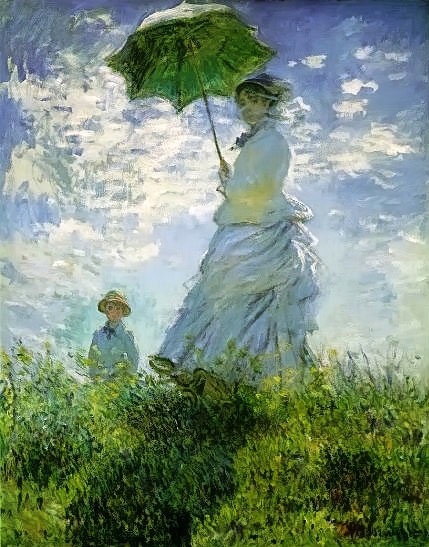 The Stroll – Camille Monet and Her Son Jean, by Claude Monet

Monet’s father instructs him to abandon his pregnant girlfriend. At this time, men of his Monet’s class didn’t usually marry their mistresses. Monet did marry her three years later, perhaps–it was suggested– more due to a rebellious streak, than out of love or even obligation to his growing family. Camille modeled for many of his paintings, and he treated her cruelly (as we will see later this year).

Through the course of this project, I’ve come to learn many details about lots of artists. Joseph Cornell is an artist I’ve grown to love even more because of this sustained peek I’ve taken into his daily life. He was a painfully shy man with a tender heart who found it difficult to open up, except around kids, home-baked sweets, or while discussing one of his celebrity crushes. (He was charmed to meet Octavio Paz and his wife, and devastated when Marilyn Monroe died).

Arshile Gorky has my undying sympathy, for all the tragedies he endured, both large and small, including one that happened after his death.

Monet, to my surprise, gets the award for being the biggest a-hole. You don’t usually hear that about him and it seems that many biographers go out of their way to gloss over his character flaws.