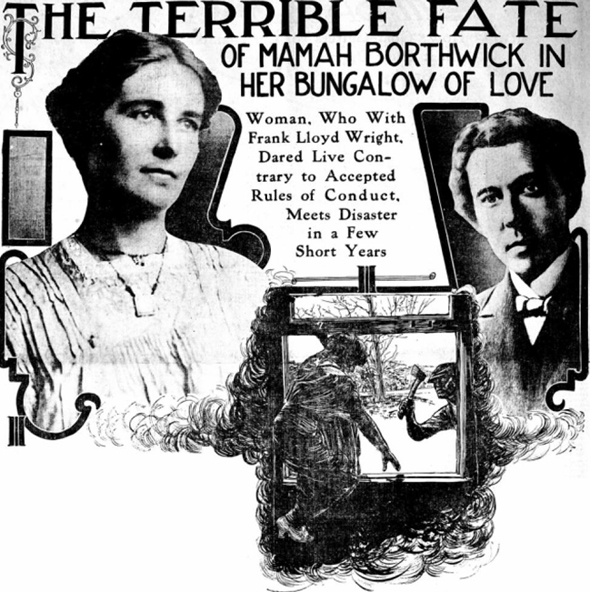 Frank Lloyd Wright’s cook kills Wright’s mistress and six others on what was supposed to be his last day of work.

Julian Carlton arrives at Wright’s estate, Taliesin, in Wisconsin earlier in the summer with excellent references. Though he starts off on the right foot, he begins to show signs of paranoia, and behaves in frightening ways, sometimes staying up all night, looking out the window while holding a butcher knife. Wright and his mistress, Mamah Borthwick, are sufficiently concerned that they advertise for a new cook and notify Carlton and his wife, who serves as a maid, that August 15 will be their last day.

While the attack on the entire household is certainly planned, it seems that a studio employee named Emil Brodelle, a draftsman, may have been the main target. In the days just before the attack, Brodelle uses a racial slur against Carlton, who is black, and they also have a physical altercation. Carlton plans to strike in the middle of the day, knowing that the residents of the house, along with the studio employees, will be in the dining area separated from the farmhands, who will be out on the property. Wright himself is in Chicago working on a project.

At noon, Carlton goes to the porch, where Mamah Borthwick and her young children John and Martha are waiting for lunch. He quickly kills Mamah and John with a hatchet. Martha runs but is killed in the courtyard. Carlton pours gasoline on the bodies and sets them on fire, which in turn engulfs the whole house in flames.

Carlton then goes after the studio personnel by pouring gas under the door of the other end of the house and lighting it on fire. He lays in wait in order to pick off the employees as they try to flee the blaze. He kills the hated Brodelle, and attacks the foreman and his teenaged son.

Carlton runs to the basement where his plan is presumably to wait out the fire in a fireproof chamber and escape afterwards. He brings a Plan B with him, though: a small vial of hydrochloric acid. Perhaps the heat is too much in the chamber, or maybe he loses his nerve, but Carlton ends up drinking the acid. It doesn’t kill him, but severely burns his esophagus.

Meanwhile, the foreman and gardener, both injured, tell a nearby farm of the attack. The foreman turns a garden hose on the studio fire, which saves it and Wright’s manuscripts inside. The neighbors arrive and assist with the rest of the fire, as well as the search for survivors. All of the Borthwicks are dead, as well as Brodelle. The gardener, who had summoned help, the handyman, and the foreman’s teenaged son initially survive, but die of their injuries later. The only survivors are the foreman and a draftsman, who are both injured.

Carlton is discovered and arrested. Meanwhile, his wife Gertrude is found down the road, dressed in her good clothes, waiting to catch a train to Chicago with her husband to seek a new job. She has no idea of what has happened, and when she can’t shed any light, she’s given $7 and a ticket to Chicago. She’s never heard from again.

The following day, Carlton is charged with and pleads guilty to the murder of Mamah Borthwick, the only death that is witnessed by a survivor and can be legally testified about in court. Six weeks later, he dies of starvation in his cell because his burned esophagus has made eating too difficult.