365 Days of Art: August 15 – The Picasso is Dedicated in Chicago 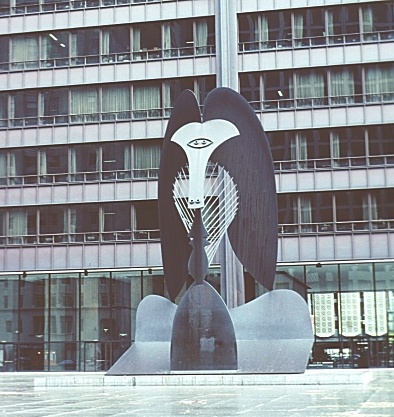 August 15 is a big day in the history of art because it’s the Feast of the Assumption on the Catholic calendar. Since the Catholic Church is such a large patron of the arts, many works of art, including the Sistine Chapel’s ceiling, have been dedicated or unveiled on this date, in honor of the Virgin Mary.

But my favorite (nothing to do with the Catholic church, by the way) is The Picasso in Chicago, which is dedicated August 15, 1967, a gift from Picasso to the city. Technically untitled, this sculpture has always been one of my favorite artworks since I was a child. I’m not sure why, though I do remember being quite taken with the fact that this animal’s ribs were like straight sticks. I took tons of photos of it every summer when we traveled to Chicago to visit my aunt and uncle and studied the photo of it that they kept by their front door.