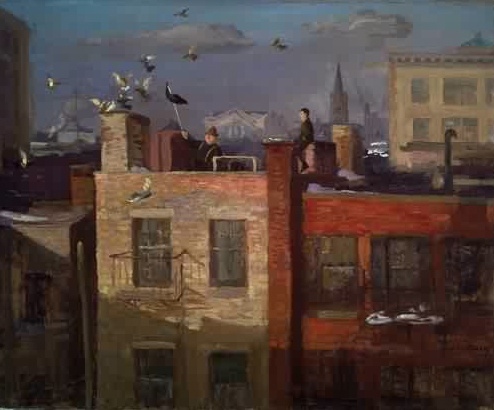 Sloan belonged to the Ash Can School of painting–rendering gritty subjects from the streets of New York in a style that felt “modern” and fresh. Although his paintings may look as if they’re loosely painted, Sloan actually spent a long time on each piece. Robert Henri joked that “Sloan” was “the past participle of slow.”

He was also a teacher and three of his famous students were Reginald Marsh, Alexander Calder, and Barnet Newman.

Most of his paintings were about New York, and completed there, but he got away for the summers–to Gloucester, MA which was a favorite enclave of painters, or to Santa Fe, New Mexico. He developed a strong interest in Native American arts and advocated for Native artists.