365 Days of Art: August 8 – Life Magazine Asks If Jackson Pollock is the Greatest Living Painter in the US 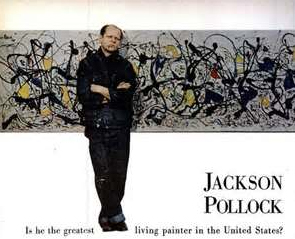 Life, the wildly popular magazine, publishes an article on Jackson Pollock which catapults him to celebrity status, and brings fine art into the pop culture mainstream. Entitled “Jackson Pollock: Is He the Greatest Living Painter in the United States?”, it also establishes the macho, alpha-male persona of the Abstract Expressionists by portraying him in his paint-splattered jean jacket, leaning against a wall with his arms folded like a teenager at detention, with a cigarette dangling out of his mouth.

Sadly, it’s also the beginning of the end of Pollock’s career because he can’t handle the pressure the article brings. Within a year, he has his most successful exhibition ever, but within two, he’s abandoned the drip technique he pioneered. A couple more, and he’s descended so deep into alcoholism and depression that he stops working altogether.