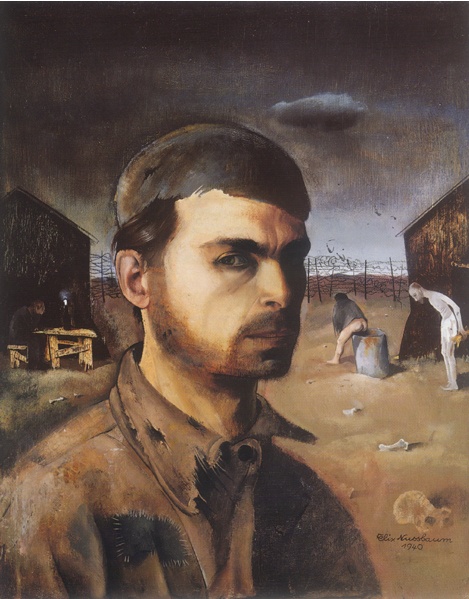 Felix Nussbaum, Self Portrait at the Camp, 1944

Painter Felix Nussbaum is murdered by the Nazis in Auschwitz.

His most powerful work is done in the last ten or so years of his life. In 1933, after the Nazis gain control of Germany, the Minister of Propaganda arrives in Rome, where Nussbaum is on scholarship as a student at the Berlin Academy of the Arts. His explanation of what it takes to be a Nazi artist leaves no doubt in Nussbaum’s mind that he will have to leave the Academy.

As a Jew, Nussbaum exiles himself to Belgium. His parents do likewise, in Switzerland. Although they eventually become homesick and decided to return to Germany, Nussbaum remains in Belgium until 1940. At this point, Germany attacks Belgium, and Nussbaum is arrested by Belgian police as a “hostile alien”. He is sent to the Saint-Cyprien camp in France but is allowed to continue painting.

He is eventually sent to Germany, but escapes from the train, reunites with his wife in Brussels, and begins a life in hiding. Friends supply them with food, shelter and art supplies, which he uses to document his secret life.

Four years later, the Germans discover and arrest Nussbaum and his wife. They are sent at first to the Mechelen transit camp, then sent to Auschwitz, where Felix is murdered a week after his arrival.

Self Portrait in the Camp 1944