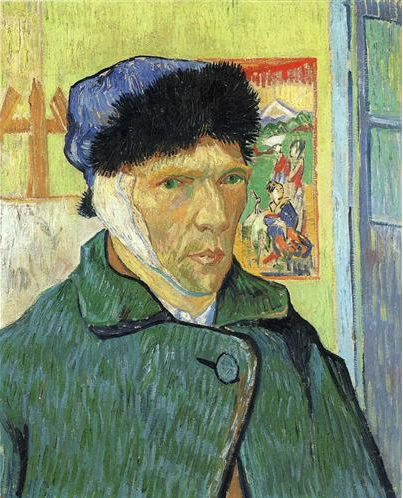 After an argument with his housemate and fellow artist Paul Gauguin, Vincent van Gogh cuts off at least part of his own ear.

Many details are missing or unclear, since Vincent himself has no memory of the incident.

We know that Gauguin and Vincent are housemates, and that Vincent has been dreaming of this artist residency for some time. These two strong personalities clash, and as they continue to fight, Vincent probably becomes distraught as he realizes Gauguin wants to leave. There is probably a final confrontation earlier in the day. That evening, van Gogh cuts his left ear with a razor, either removing the entire ear, or a good piece of it. Ear wounds are known to bleed heavily, and he begins losing a large amount of blood right away. He bandages the wound, wraps up the ear, and delivers it to a brothel where both he and Gauguin are clients. (The local newspaper reports that van Gogh has given the ear to a prostitute with an instruction to guard it carefully). He goes home, collapses from loss of blood, and is discovered the next morning by the police.

At the hospital, Vincent repeatedly asks for Gauguin, who never comes. In fact, they never see each other again. Gauguin notifies Vincent’s brother Theo, and tells one of the policeman investigating the case:

Be kind enough, Monsieur, to awaken this man with great care, and if he asks for me tell him I have left for Paris; the sight of me might prove fatal for him.”

Vincent is able to return to the Yellow House by the beginning of January, but suffers repeatedly from hallucinations all month long.

Fun Fact: Gauguin discusses the incident in his memoirs, though many historians find his account to exaggerate his own role in what contemporary doctors have called Vincent’s psychotic break. For example, Gauguin says that Vincent attacks him with a razor prior to cutting his ear, and that Vincent’s instructions ask for the ear to be delivered to Gauguin.