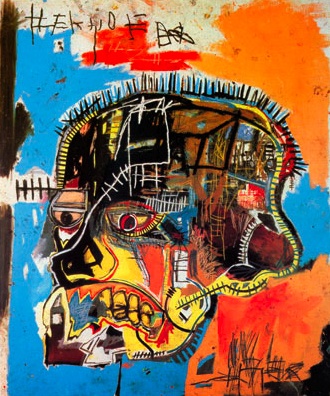 February 10, 1985
Jean-Michel Basquiat appeared on the cover of The New York Times Magazine in a feature entitled “New Art, New Money: The Marketing of an American Artist”:

Since I was seventeen, I thought I might be a star. I’d think about all my heroes, Charlie Parker, Jimi Hendrix. . . . I had a romantic feeling of how people had become famous. Even when I didn’t think my stuff was that good, I’d have faith.

It makes me sad that the two heroes he mentions are known as much for their addictions as for their creative output. Around the time of this interview, Basquiat’s heroin addiction began to interfere with his relationships, and his day-to-day life and work, and he died of an overdose about three years later.

My favorite quote from the article is this one: “I like kids’ work more than work by real artists any day.”