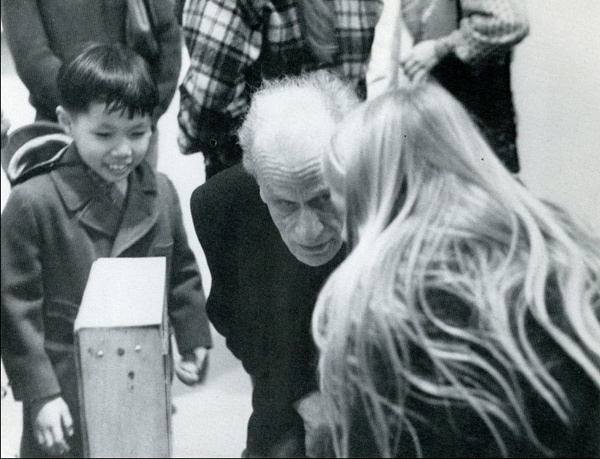 Joseph Cornell speaking with fans at his Children's Only art exhibition.

February 11, 1972
Joseph Cornell holds a Children’s Only art exhibition, which opens at Cooper Union in New York City. Brownies and Cherry Coke were served instead of wine and cheese (Cornell actually had a huge sweet tooth; that might have been for him as much as for the kids). The art was hung three feet from the floor. Cornell gave the kids a tour, and answered every question they had. Although he was known to give elliptical answers sometimes in response to journalists’ questions, he met the kids where they were at in his art discussion, explaining that Andromeda, for example, was “a lady up in the stars”. This is believed to be the first-ever event of its kind, certainly by a major artist, and was the last exhibition Cornell attended before his death later that year.

To begin to understand how special this event was, it’s helpful to know that this was the same painfully shy guy who lived in Flushing, Queens, and would hide in a bathroom for an hour to avoid social interactions. Maybe he felt like it was easier with kids. He always said they were the most enthusiastic fans and appreciators of his collage boxes.

He would hate this project by the way; he attached no importance whatsoever to dates.