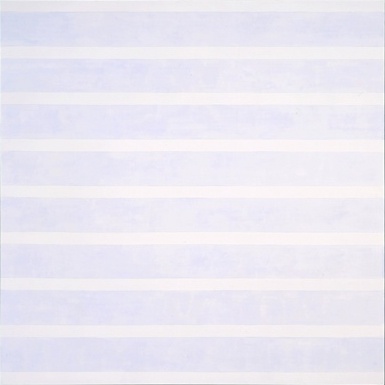 The Whitney Biennial opens; at least one of Agnes Martin’s grid paintings is featured.

Did I hear you wondering, Who is Agnes Martin? She worked at the same time as the Abstract Expressionists (in fact, had a much longer, more productive career than most of them), in New York City in the 50s which was the height of that movement, in a similar large format (6 feet by 6 feet, until old age forced her to scale it back to 5 feet by 5 feet) in a muted palette of mostly black/white/gray, and in the visual language of abstraction. That all sounds like the definition of Abstract Expressionism. So why isn’t she as well known as Jackson Pollock, Willem de Kooning, heck, even a Franz Kline or an Ad Reinhardt (who was a close friend and mentor)?

I didn’t know much about her until she died, and even that was possibly because I happened to be in grad school, in a painting program, at the time of her death.

Martin is the opposite of flashy, and that’s the short answer; who could compete with the partying and testosterone and noise of all those Ab Ex boys? Both her own personal appearance and her artworks’ are free of adornment. Her work needs time spent in front of it, to get to know it. It’s way too nuanced to reproduce well on a computer screen–sorry! But I think the time spent is well worth it.

There are a couple of readings of Martin’s work that speak to me. One is a meditative one, encompassing the idea of a mantra. She was known to practice meditation, and the experience of standing in front of her paintings, swallowed by the large scale with one’s eyes tracing repetitive rectangles is similarly calming but proactive. The small rectangles that make up the larger square grid are precise, but without the machine-made quality of something mass-produced. Martin cultivated the evidence of the man-made; she really did pencil each line by hand (after carefully calculating her measurements of course) and turned the paintings to control the dripping of the paint by encouraging them to fall in certain directions. She painted in this style for about 40 years. Yes, 40 years. What is that, if not meditation on a mantra?

The other reading of her work is intriguing and personally fascinating to me. It’s thought that Martin was a closeted lesbian and the ways that influenced her work and even the way she presented herself to the world make for an interesting read of her grids. She always presented herself (especially in her later years) in a practical, masculine, almost ascetic, way, free from any feminine embellishment like accessories or styled hair. Her clothing consisted almost exclusively of a shirt without a collar, pants, and canvas shoes–nothing more than the bare minimum. She took pride in her construction skills, and after she left New York for New Mexico, built her own studio, and performed all the “hard labor” that needs to be done on a painting before you can paint on it. And for large canvases, the prep work is extensive. In an interview filmed when she was in her late 70s at least, she can be seen hoisting a large canvas, and gessoing it herself, insisting that she could hire someone if she wanted to, she just didn’t want to. She’s pretty bad-ass. The asceticism extended beyond her appearance, to a solitary life, for a while even living without water and electricity.

Some of her interviews suggest at either a hidden love affair, or an unrequited love as the possible reason for her move out of New York and into the untamed southwest. She said that “passion” and “lust” were “exhaustible” and “not real” emotions, and “Real love is when you’re not making love but you still love each other. Innocent love is what I paint about.” She reportedly said that searching for love “is a great mistake” and described how she had wasted some time doing that but had moved beyond it, to a point where it wasn’t a part of her life. She never married, and there are no known love affairs. This too, was rather unheard of in the NYC art world of the 1950s, when the men as well as the women had multiple and often public love interests.

A quick look at the social climate of the 1950s: it was a long way from the Stonewall Rebellion and start of the gay rights movement. Being gay was clandestine and secretive. Underground gay bars, like the Stonewall in NYC, were raided regularly by police. People who were arrested in such raids were fired from their jobs. Various laws prohibited gays from everyday activities like drinking alcohol in bars. If you can imagine that. Our illustrious Senator McCarthy was holding hearings trying to find out who was gay and who wasn’t. Those who were gay, or suspected of it, weren’t considered worthy to serve our country in the FBI or any number of government jobs and were rooted out amid a culture of suspicion and fear. Living quietly underground–unless you were extremely rich and could afford to have this eccentricity–was the only viable way to live as a gay man or lesbian at this time.

In this context, thinking about Martin’s solitude, quiet paintings, even her self-denying existence without basic amenities, makes a certain sense. It’s also been noted that her insistence on the handmade, within the rigid overall grid structure, seems almost rebellious. Even now that viewpoint is still held with regard to gays “choosing that lifestyle” that flies in the face of morality and American values. But Martin’s handmade rebellion, if it can be considered that, was executed by her the way she did everything else–in a quiet way that won’t cause a fuss. This quiet rebellion that she perpetrated day after day in her studio for over 40 years was almost like hiding in plain sight. And the thought that one can look through the grids like a screen–but can’t see anything on the other side, can’t get to know her or the painting any better other than continuing to retrace the surface–also makes sense psychologically. She did not want to be known; she used the grid to hide. Best of all, Martin always said that her very first grid painting came to her as she was thinking of a way to paint “innocence”. In the context of the McCarthy hearings, this meditation, over and over, on innocence seems profound.

A really great article on these ideas can be read here. An exhibition of Martin’s work called Agnes Martin: Beyond the Grid is on view at Tacoma Art Museum now. There are several grid paintings and prints, as well as early work, including the nude female portrait that was included in the Hide/Seek exhibition at TAM a couple of years ago. The current exhibition doesn’t talk about her sexuality at all, but is wonderful.