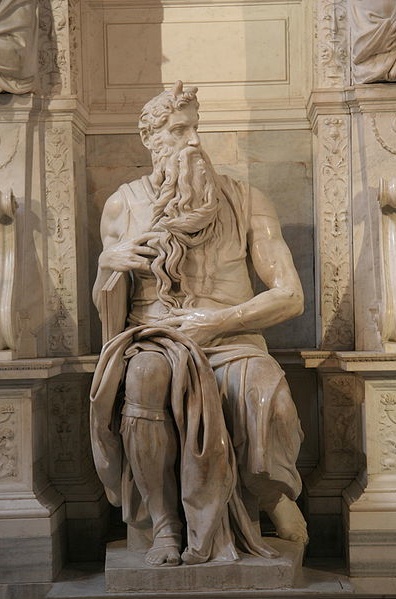 In one of his last acts, Pope Julius II issues a Papal Bull declaring that Michelangelo will carve his tomb. Michelangelo had actually begun the project seven years earlier, but was interrupted by Julius’s commission of the Sistine Chapel ceiling–to Michelangelo’s mind, a frustrating and far less interesting proposition, but the only way to get to carve the tomb.

Julius decreed that he was setting aside 10,000 ducats for payment, and died two days later. Michelangelo carved the tomb, although it was scaled back by subsequent Vatican directives and delayed by Julius’ descendants, so that by the time it was finally completed in 1545, it was much smaller than he and Julius had originally envisioned. Julius’s declaration that the tomb be installed in the Sistine Chapel wasn’t carried out either (the wishes of the once-feared Julius didn’t mean much after death). His tomb can be seen in Rome at the chapel of San Pietro in Vincoli (St. Peter in Chains).

Fun Fact: Although Michelangelo was deeply disappointed with the scaling-back of the overall project, he considered his statue of Moses to be his best work. (That’s saying something. I love the Sistine ceiling, and for his sculptures, my favorite is Mary holding Jesus in St. Peter’s). Rumor has it that, just after completing the statue, Michelangelo banged Moses’ knee with his hammer and commanded him to speak. There is supposedly a mark on the statue’s right knee to attest to this.