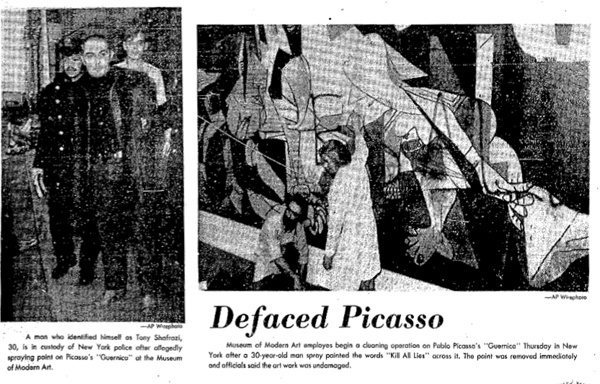 Tony Shafrazi spray-painted Picasso’s painting Guernica, which hung in the Museum of Modern Art, with the words “KILL LIES ALL”. Luckily, the paint was easily removed due to heavy varnish on the painting’s surface.

Shafrazi was protesting the announcement, the day before, of the release on bail of U.S. Lieutenant William Calley, who was convicted in 1971 for his part in the My Lai massacre in Vietnam. Calley had initially been sentenced to life imprisonment, then house arrest, and received a limited pardon from Richard Nixon.

Shafrazi was a member of the Art Workers’ Coalition, which in 1970 had staged a protest at MoMA by unfurling a My Lai protest poster in front of Guernica. Picasso’s work was painted in response to the bombing of the village of Guernica during the Spanish Civil War and is about the suffering of innocent civilians–a perfect choice, really, to protest the massacre in Vietnam.

Shafrazi was sentenced to just six months probation. MoMA initially wanted to keep the vandalism secret so as not to encourage future acts of vandalism, but given the public nature of the act, as well as the presence of visitors such as a high school field trip from Scarsdale, that was wishful thinking.

Shafrazi gave the following statement to Art in America in 1980:

I wanted to bring the art absolutely up to date, to retrieve it from art history and give it life. Maybe that’s why the Guernica action remains so difficult to deal with…I wanted to… encourage the individual viewer to challenge it…see it in its dynamic raw state…not as a piece of history.

Picasso once painted over a Modigliani, and I wonder where he’d stand on this (he had recently died by the time his painting was vandalized). But, he did say:

Ultimately, what is important about a picture is the legend it has created, not whether it is preserved or not.

Everything I have done has been for the present, in the hope that it will forever remain in the present.

I’d never approve of vandalizing art, but Picasso and Shafrazi actually don’t sound too far apart on this, theoretically speaking.

By the way, Shafrazi went on to become an art dealer to the rich and famous (go figure). His client list began with the Shah of Iran and he currently represents high-end artists like Francis Bacon. An opening reception recently included a cake that was frosted as a replica of Guernica with icing “defacing” it. Hm. I could almost begin to buy the idea (not the act) as a political statement, but turning it into a gimmick for rich folks’ entertainment doesn’t work for me.