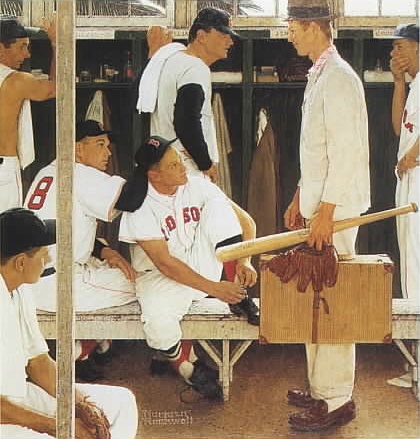 More info, for the baseball fans out there: The painting is believed to be about Mickey McDermott, a rookie for the Red Sox in 1948. His is a story that has everything good and bad in sports: a sweet curveball, unlimited natural talent, a stage parent living vicariously through his accomplishments, sleazy sports pros taking advantage and cashing in, unrealized potential, and a descent into alcoholism.

McDermott’s father played baseball in the minor leagues, until he was replaced at first base by Lou Gehrig (poor guy never had a chance). He decided that one of his sons would be a professional baseball player. His first son died at age seven; his second was born with deformed legs; Mickey was his father’s last chance.

By age thirteen, Mickey was playing on a semi-pro league and also had his first tryout with the Brooklyn Dodgers. They were interested, but signing a thirteen year old was illegal. Two years later, Mickey’s father changed his birth certificate to show that he was eighteen and again there was interest from a professional team: the Red Sox. General Manager and future Hall of Famer Joe Cronin found out that Mickey was really fifteen and cut a backroom deal with his father: Dad got a $5K signing bonus and two truckloads of Ballantine beer. They signed him and put him to work in the minor leagues. (I love the Sox, but I’m not proud of everything they do. See: last team to integrate, twelve years after Jackie Robinson broke the color barrier).

At age seventeen, he threw his first no-hitter (possibly the youngest person to throw a no-hitter in the high minors), and another the next season. He joined the Sox in the major leagues in 1948. He bounced up and down between the majors and minors, setting minor league records and even pitching a one-hitter at Fenway. Twice, he refused to sign with a new team, and once, he was released when he assaulted a hotel detective who mistook his wife for a prostitute. He finished his career at an even .500 with a 3.91 ERA–disappointing stats for a one-time phenom.

He became a scout for the Oakland A’s (hired by his old teammate Billy Martin) and, interestingly, turned in the first scouting report on Mark McGwire. Details like this are more interesting than anything he accomplished as a player. And oh yeah, he was a drinking buddy of Jack Kerouac’s, plus the guy who played the principal in The Breakfast Club. (This guy is the Forrest Gump of baseball). He also won $7M in the Arizona Lottery, got sober, wracked up several wives, wrote a book about his misadventures, and died of cancer. Pretty much in that order. Sad.

Fun Fact: The model for McDermott was a high school athlete named Sherman Safford from Pittsfield, Massachusetts (my birthplace).