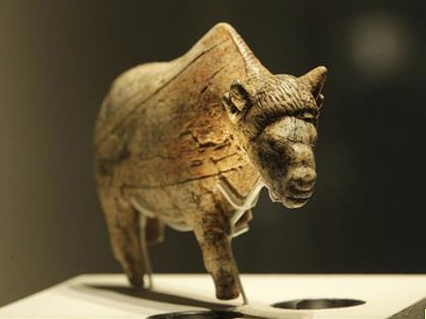 Sculpture of an adult female bison carved from a large piece of mammoth tusk, at least 21,000 years old, discovered in Russia.

February 5, 2013
Ice Age Art: Arrival of the Modern Mind opened at the British Museum. The exhibition presented artwork (not archaeological artifacts) between 10,000 and 40,000 years old, created during the last Ice Age. The distinction between art and artifacts represented humans’ arrival at complex thought, as illustrated by an embrace of abstraction, symbolism, and creativity and was underscored by presenting the Ice Age art alongside examples of modern art. The juxtaposition of work by artists like Matisse and Henry Moore showed shared qualities not only in the lines of the figures, but also in the sophistication of presentation: there are imaginary figures, ones in motion, and experiments in perspective and scale.

The Ice Age works were discovered mostly in Europe, and are the oldest known figurative art in the world. (We know that early humans were making sophisticated tools, abstract items and music in southern Africa 100,000 years ago, but the earliest surviving works representing people and animals appear after groups of people moved into eastern and central Europe about 45,000 years ago).

The plentiful wildlife roaming the grassy plains helped these communities of hunter-gatherers grow and flourish for about 5,000 years. Then, the Ice Age began, and the subsequent struggle for survival seems to have brought a surge of creativity. The exhibition suggested that “faced with increasingly difficult conditions, finding the courage to go on” required early humans to “…fix… on things outside the[mselves],” — the spiritual, perhaps.”

That sounds pretty contemporary too. That we can recognize ourselves and how we think, and most importantly, our desire to communicate, in our ancestors from 40,000 years ago is pretty fascinating.