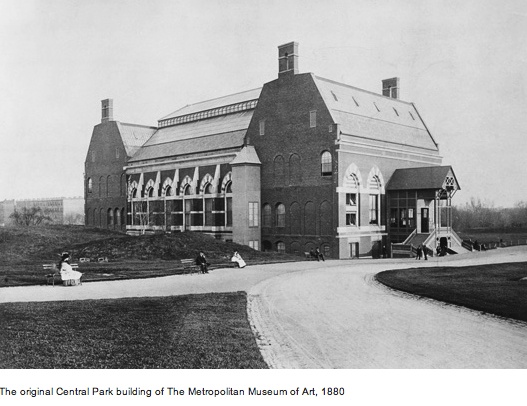 February 6, 1871
The Board of Trustees of The Metropolitan Museum of Art discussed the plan that led to the construction of the Museum’s first building.

At this point in time, the Met had few artworks, no permanent home, and no staff. The Trustees, along with the recently established American Museum of Natural History, decided to petition the New York State legislature to approve a tax measure that would finance a building to house and exhibit the collections of both institutions.

Later, a deal was worked out that gave ownership of the proposed buildings to the City of New York, while the boards of each museum would own the collections. A law was eventually passed that authorized construction of a building for each museum, stipulating that they must be fire-proof. It would be several years before construction began at its current home in Central Park. In the meantime, the Met began hosting exhibitions in rented spaces, first at 681 Fifth Avenue in midtown (it’s now a Tommy Hilfiger, of course) and later on West 14th Street.