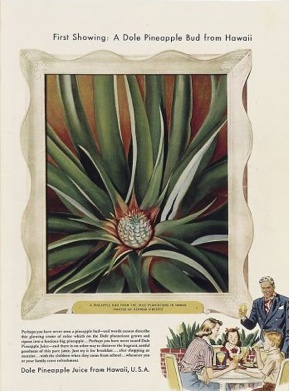 February 8, 1939
Georgia O’Keeffe arrived in Honolulu aboard the SS Lurline, on a trip paid for by the Hawaiian Pineapple Company (now Dole Food Company) with the mission to paint two pineapple paintings they could use in their advertising campaign.

O’Keeffe’s reputation as a “difficult” artist preceded her, and she and her client had a rocky relationship at times. She wasn’t allowed to live in the pineapple workers’ camp as she wanted, but was placed with a family that had Japanese servants (anathema to her).

O’Keeffe documented her nine weeks in the Territory of Hawaii (it wasn’t a state yet) with twenty paintings, numerous photographs, and letters to her partner Alfred Stieglitz. One of them conveys her extreme annoyance that the pineapple company gave her a “manhandled” (i.e. cored and sliced) pineapple to paint.

Despite this rocky start, O’Keeffe said later that the trip was perhaps the second-most important and productive time in her career. “If my painting is what I have to give back to the world for what the world has given to me…these paintings are what I have to give…for what three months in Hawaii gave to me.” She also bonded personally with the lonely, home-schooled 12-year old girl from her host family and continued to write to her even after she’d left Hawaii.

Back in New York, O’Keeffe got some small revenge on the Hawaiian Pineapple Company by submitting paintings of–not pineapples–but a papaya tree and a crab-claw heliconia. HPC didn’t accept this as fulfillment of the contract, but someone thought to send her a live plant with a pineapple just starting to bud amid the spiky foliage, and that painting and the heliconia were both used in the ad campaign that year.