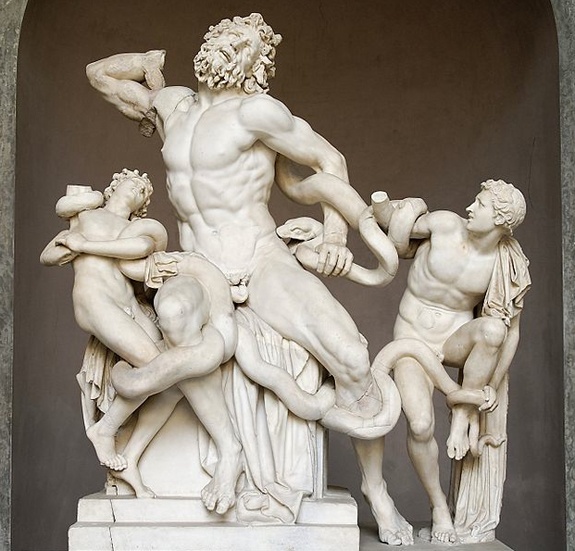 Laocoon and His Sons

January 14, 1506
The Vatican Museums got their start on this date with the purchase of the sculpture of Laocoön and his Sons.

Earlier, the marble sculpture had been discovered in a vineyard in Rome. After sending Michelangelo and another artist to evaluate the find, Pope Julius II decided to purchase it from the owner of the vineyard, based on the artists’ report. The pope put the sculpture on display at the Vatican a month later. (It’s still there).

The sculpture depicts the mythological priest Laocoön and his sons being attacked by sea serpents. In Greek mythology, Laocoön was a priest of Poseidon, living in Troy. When the Trojan Horse showed up at the city gates, he was suspicious. He believed it was a ruse and tried to prove it by striking it with a spear. However, he and his sons were swiftly killed by sea serpents, obviously sent by Poseidon. The deaths were interpreted by the Trojans as proof that the horse was a sacred object, and uh oh, it was let in the gates. We all know how that turned out.

The sculpture was probably commissioned originally for the home of a wealthy Roman, possibly in the Imperial family, between 27 BC and 68 AD.