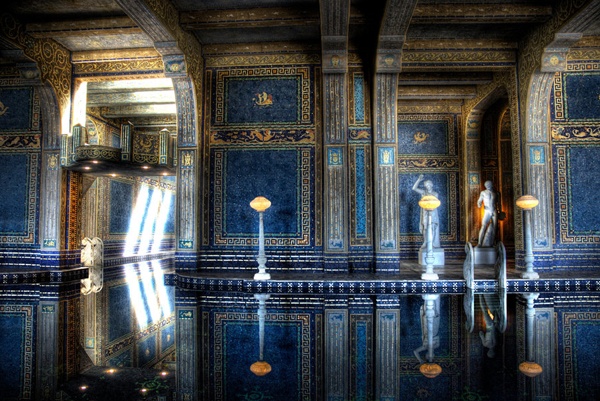 Julia Morgan, brilliant architect at a time when women weren’t allowed to do that, and feminist pioneer, was born on this day in San Francisco.

She always wanted to be an architect, but had to study civil engineering at UC Berkeley (my alma mater) because there was no architecture major there. She was the only female in her class. She was a student of Bernard Maybeck, who encouraged her to apply to his alma mater: the architecture program at l’École nationale supérieure des Beaux-Arts in Paris. She was initially denied entrance because they had a no-female policy.

She was the first female graduate there, and the first female architect ever licensed in California. Employed in John Galen Howard’s firm, she worked on several buildings on the UC Berkeley campus. Howard once told a colleague that Morgan was “an excellent draftsman whom I have to pay almost nothing, as it is a woman.”

She opened her own firm in 1904, and designed more than 700 buildings. She specialized in California buildings for institutions serving women and girls like the YWCA, Berkeley Womens City Club, and Mills College.

At Mills, Morgan’s designs included El Campanil, believed to be the first bell tower on a United States college campus. Morgan became fairly famous when the tower was not damaged in the 1906 San Francisco earthquake. It also demonstrated her knowledge (which was rare then) of steel-reinforced concrete, which held up well in quakes.

She practiced in the Arts and Crafts style and is probably best known for her 30+ years of work on Hearst Castle in San Simeon, California. This compound is notable for being excessive and also gorgeous. It was the first zoo in the country, at a time when zoos weren’t organized yet; it was really just a private collection of exotic animals. It featured a private movie theater, before that was de rigeur. There is a movable ceiling that can be dropped down to change the look and feel of the room. It was the inspiration for the home in Citizen Kane. If you’re on California’s Central Coast, this is the best thing you can see. Make it a road trip! I absolutely love it.

We were very proud of Julia Morgan on the campus and in the city of Berkeley, although she was probably underrecognized outside of the Bay Area until recently. Not only was she an accomplished architect with an elegant eye, she was a pioneer for women. Julia Morgan is the first woman to receive the American Institute of Architects Gold Medal, which she received posthumously in 2014.