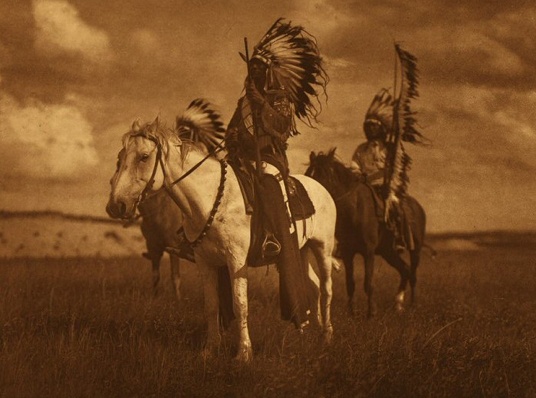 January 24, 1906
At his office on Wall Street in New York, multi-millionaire and book collector J. Pierpont Morgan met with Seattle photographer Edward Curtis to discuss funding for Curtis’ pet project: a visual and textual documentation of all Native American tribes.

Curtis had been distressed for some time over the forced assimilation of Native Americans by the US government. At that time, the government forcibly removed Native American children from their families and put them in special boarding schools designed to wipe away all traces of their heritage. Entire Native American nations were relocated to unfamiliar climates and geographies that didn’t support their survival skills, like the Nez Perce who were moved from the Northwest to an arid reservation in what is now Oklahoma. (Most of the Nez Perce nation subsequently died of starvation, as well as malaria).

Curtis recognized that the nations were rapidly losing their customs, rituals, and way of life, and while he couldn’t do anything to stop it, he decided to document what remained in order that they wouldn’t be forgotten.

Working independently, he spent several summers visiting many tribes. He photographed them, recorded their languages and songs on a wax recorder (when he was allowed) and attempted to learn their customs, religions, and world views. Although he was an extremely successful high-society portrait photographer, even photographing President Theodore Roosevelt’s children, his attempt to fund the project alone left him perpetually on the verge of bankruptcy (not to mention divorce). He began seeking support from institutions and individuals with an interest in the subject, or the means to make a difference. J. Pierpont Morgan mostly fell into the second category, though he had also built a reputation as a collector of rare and artistic books.

In a letter the day before the meeting, Curtis wrote to Morgan:

As to the artistic merit, it must speak for itself, and no one can be a better judge of that than yourself. I feel the work is worthwhile and as a monumental thing, nothing can exceed it. I have the ability, strength, and determination to finish the undertaking, but have gone to the end of my means and must ask someone to join me in the undertaking and make it possible for all ages of Americans to see what the American Indian was like.”

At the meeting, Morgan initially declined to contribute any funding for the project, but Curtis persisted and showed him a portfolio of his evocative and technically perfect Native American photos. Morgan finally agreed to fund $75,000 over five years for fieldwork (hiring interpreters and other staff, paying for travel, etc), for the documentation of all tribes that was eventually compiled into three volumes.

It should be noted that under the arrangement, Curtis actually worked for free, like so many artists before and after him. His photography and processing of the images, his writing the text, his labor on the fact-finding trips, and his hustling of subscriptions in order to pay for the printing and binding of the books–were all unpaid.