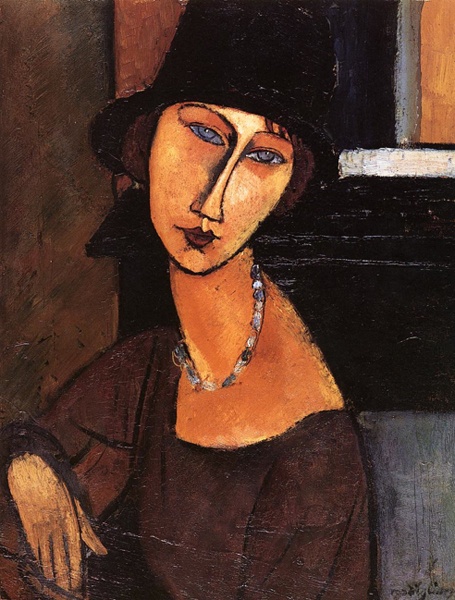 Jeanne Hebuterne with Hat and Necklace, by Amadeo Modigliani, 1917

They had a very troubled history, and he abused her. Her family disapproved of the relationship, not least of all because they chose to live together instead of getting married, and because he was a Jew and an artist. Or, perhaps it had something to do with Modigliani being an alcoholic, drug addict, and womanizer with an unchecked temper? He repeatedly was arrested after blackouts and hallucinations. Once, he dragged Jeanne by her hair and proceeded to bang her head into the gates of the Luxembourg Gardens.

She was so crazily devoted to him that she refused to leave his side even to call the doctor as he lay dying of tubercular meningitis; a neighbor discovered her clinging to a feverish, hallucinating Modigliani in their bed. Modigliani died soon after this, on January 24, at age 35.

Hébuterne was twenty years old and eight months pregnant with their second child when she committed suicide before dawn on the day of Modigliani’s funeral, January 26. The funeral guests weren’t even aware of the tragedy. Her family refused her wish to be buried with Modigliani, burying her in another Paris cemetery entirely, although ten years later, they reinterred her next to his grave. Modigliani and Jeanne had a toddler daughter who was sent to live with Modigliani’s sister in Italy. She was also named Jeanne, but didn’t learn about her early childhood, her famous/infamous parents, or their deaths until she was an adult. She ended up writing a biography of her father.

What a sad story.