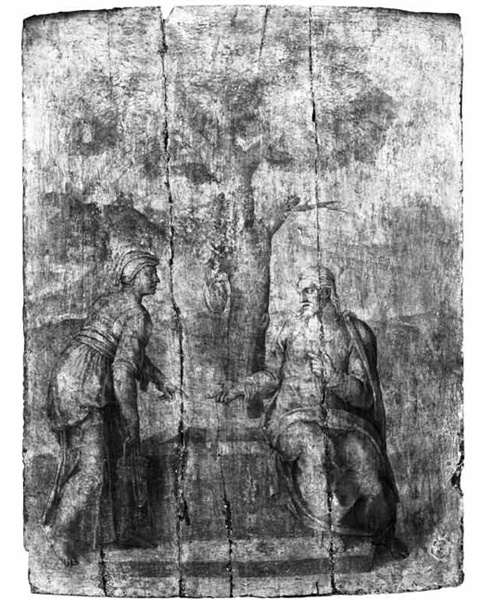 Michelangelo, Christ and the Woman of Samaria

Christ and the Woman of Samaria was made when he was about 65. It’s drawn, not on paper, but on a poplar panel that has warped and curved over time. In order to be able to draw on the wood surface, he covered it with gesso (a plaster mix), then drew with ink. At 17 by 13 inches, it’s one of his largest drawings (except for the large cartoons that he made when painting his wall frescoes).

The drawing depicts an incident from the Bible where Christ met the Woman of Samaria drawing water at Jacob’s well. It’s believed that the piece was commissioned by an educated, religious Roman woman, who would have used it as a private devotional image in her home.

The choice of this biblical subject is unusual. The Woman of Samaria had already had five husbands and was living with another man who was not her husband. Jews did not normally talk to Samarians. It would seem that Samarians themselves did not normally talk to this woman. By singling her out for attention, Christ indicated that all of humanity was important to him, much like the story of Mary Magdalene.

A characteristic of Michelangelo’s figure style that was commented on by his contemporaries was his so-called terribilitià – a kind of awesome statuesque grandeur. It’s not beauty alone, because some artists who specialized in beauty during the Renaissance made work that isn’t arresting in the way Michelangelo’s work is. His figures’ bodies are beautiful, but solid. Gestures are significant: look at Christ’s finger pointing at the Woman, the way God points at Adam in the fresco on the Sistine Chapel ceiling. Looks exchanged between figures are meaningful. There is an action; there is a mood created.

One thing I didn’t know about auction prices: when the bidding stops (in this case at $6.8 million), the auction house’s premium is added, like a sales tax, for a total of $7.4 million here.