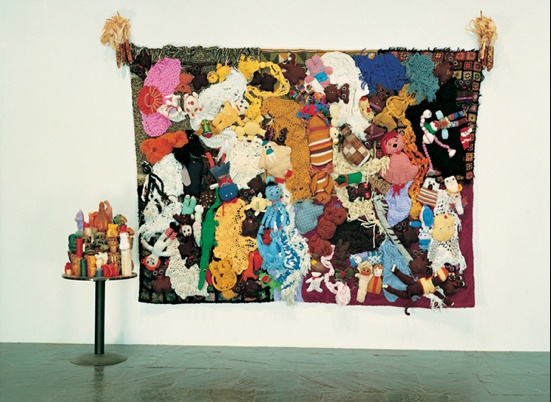 Mike Kelley, More Love Hours Than Can Ever Be Repaid and the Wages of Sin, 1987

January 31, 2012
Mike Kelley, described variously as “one of the most influential American artists of the past quarter century and a pungent commentator on American class, popular culture and youthful rebellion” by the New York Times, and as a proponent of “clusterfuck aesthetics” by the Village Voice (which I think was a compliment), commits suicide.

His work involved found objects, drawings, assemblage, performance and video. He expanded the repertoire of artist materials by incorporating items like crocheted blankets, and especially, children’s toys into his work.

Kelley’s work is complicated, layered with meaning, and challenges the idea of What Art Is. (Because like it or not, that’s changed in recent decades, and one of the people you can credit–or blame–is Mike Kelley). He was extremely well-read and could intelligently talk about his influences and ideas. In fact, he said the reason he took to writing about art was because so many art critics got it all wrong, particularly when discussing his work.

He worked with contrasts like high and low, fine art vs. crafty/crappy materials like blankets, photocopies and room deodorizers, and other contrasts, such as a video of Superman reading Sylvia Plath’s The Bell Jar. A superhero reading Plath’s melancholy classic? That’s Kelley. But that the reading was part of an elaborate, ongoing installation that involved architecture students sending him cardboard models of Superman’s home on the planet Kandor, which he scaled down, created multiple versions of, enclosed in glass bottles and installed with items like bedroom furniture and Greek columns? That’s even more Kelley.

His work, which was inspired by diverse sources including politics, philosophy, the working middle class, art history, and underground music, could be shocking, and caused a stir more than once. Many people were unsettled by his use of crocheted blankets and plush toys. He created fictional environments with these childhood symbols, which led to a psychological reading by many critics and viewers that his work was about childhood abuse (he said it wasn’t, nor was he personally abused). But no doubt, the toys caused a visceral reaction to the work, since most of us have a strong personal association with toys like these. In 1988, there was an outcry over his installation called Pay for Your Pleasure, which featured a gallery of portraits of cultural and artistic geniuses — poets, philosophers and artists included — subverted at the end by a painting created by a convicted criminal.

Complicated work that needs some time and doesn’t give an easy reading. Some of it is in fact pretty disturbing, especially involving the plush animals, but I won’t get into that here.

He was also an influential teacher. One of his students, Jennifer Steinkamp, is currently exhibiting a digital work that is in honor of Kelley. Made while he was still alive, it depicts a digital tree, projected on the wall, which grows and sheds leaves, and twists and turns according to its own natural, but sped-up and exaggerated, cycle. It’s called “Shimmering Tree” and is meant as a portrait of Kelley. You can see it at Tacoma Art Museum.