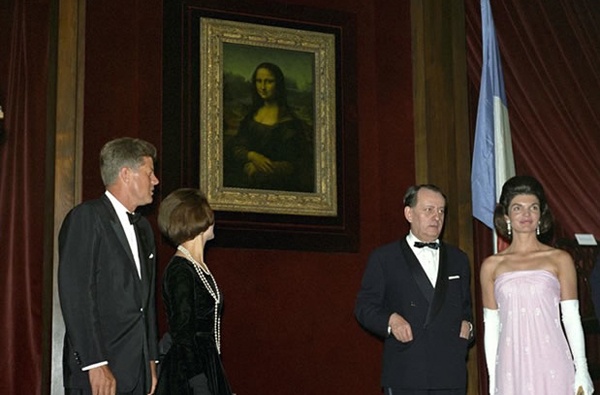 John and Jacqueline Kennedy attend the opening of the Mona Lisa exhibition at the National Gallery of Art alongside French cultural minister Andre Malraux and his wife, January 8, 1963. (JFK Library)

January 8, 1963
The Mona Lisa, on loan from the Louvre, is unveiled at the National Gallery of Art in Washington, DC in a star-studded opening reception.

The exhibition was made possible almost entirely due to the efforts of Jackie Kennedy, the First Lady. The Kennedys, and especially Jackie, brought a well-known love of art and culture with them to the White House. At the beginning of President Kennedy’s administration, she was far more popular than he was abroad, and charmed heads of state in ways the young, inexperienced president could not, notably by speaking French with President Charles de Gaulle and his wife. Her open affection for French art and culture endeared her to the French public as well.

Through Jackie’s persistence and charm, and also from a desire to display solidarity with democratic nations just as the Cold War against Communism was heating up, France agreed to loan the Mona Lisa, the first time it had left French soil. Notably, the loan was made directly to President John F. Kennedy, not to the National Gallery.

Fun fact: the Mona Lisa was crated in a temperature-controlled container and shipped via ocean liner in December 1960. The trip was supposed to be a secret due to security concerns, but when word got out about the famous passenger on board, the chefs created Mona Lisa-inspired dishes and passengers threw Mona Lisa theme parties.

On the evening of January 8, the opening reception at the National Gallery attracted over 2,000 people. In attendance were the President and First Lady, of course, as well as all 535 members of Congress, all nine Justices of the Supreme Court, the President’s cabinet, and many other diplomats and prominent people from the art and museum worlds.

The painting was unveiled to the public the next day and was guarded around the clock by U.S. Marines. Over 500,000 people came to see it at the National Gallery over 27 days. The Mona Lisa was then exhibited at the Metropolitan Museum of Art in New York, where it attracted 1.2 million visitors. My mother was one, and still talks about the nuns taking her class to the city to see it.