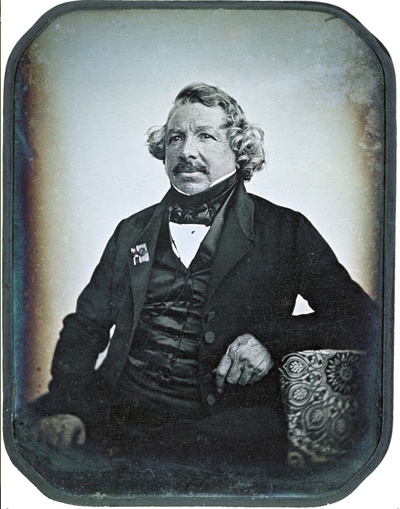 It was discovered in 1835 by Louis Daguerre. The plate was created by lining a thin copper plate with silver, then exposing it to iodine fumes. The plate was now photosensitive and ready to receive an image in the camera, with an exposure of at least ten minutes.

The exposed plate was then developed in the darkroom by bringing the plate into contact with fumes from heated mercury; then, the resulting image was fixed on the silver with a hot solution of salt. To give the image a warmer tone and physically reinforce the powder-like silver particles on the plate, a gold chloride solution was pooled onto the image and the plate was briefly heated over a flame, then drained, rinsed and dried.

The surface of the daguerreotype was very delicate and the silver was subject to tarnishing, so the plate needed to be kept sealed and under glass. Because the process was time-consuming and exact, and the resulting image was so delicate, other photographic methods displaced the daguerreotype fairly quickly.

Fun Fact: Because the image needed at least ten minutes of exposure in the camera, subjects had to sit perfectly still. A street scene taken by a daguerreotype would look almost deserted, since passing carriages, pedestrians, and horses would pass by too quickly to be captured.