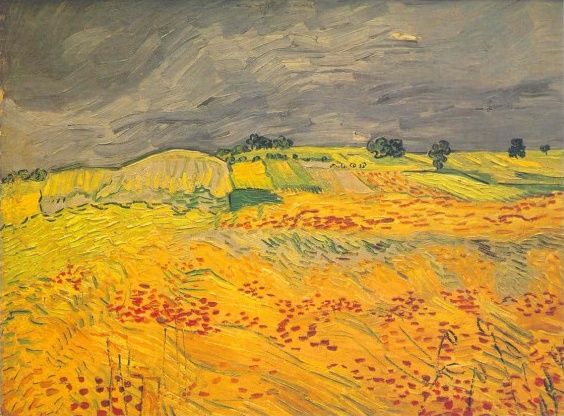 After his last visit to Paris, which everyone agrees was tense and strained, Vincent writes to his brother Theo and sister-in-law Jo:

Jo’s letter was really like a gospel for me, a deliverance from anguish which I was caused by the rather difficult and laborious hours for us all that I shared with you…

Once back here I too still felt very saddened, and had continued to feel the storm that threatens you also weighing upon me. What can be done – you see I usually try to be quite good-humoured, but my life, too, is attacked at the very root, my step also is faltering. I feared – not completely – but a little nonetheless – that I was a danger to you, living at your expense – but Jo’s letter clearly proves to me that you really feel that for my part I am working and suffering like you.

There – once back here I set to work again – the brush however almost falling from my hands and – knowing clearly what I wanted I’ve painted another three large canvases since then. They’re immense stretches of wheatfields under turbulent skies, and I made a point of trying to express sadness, extreme loneliness. You’ll see this soon, I hope – for I hope to bring them to you in Paris as soon as possible, since I’d almost believe that these canvases will tell you what I can’t say in words, what I consider healthy and fortifying about the countryside…

I often think of the little one, I believe that certainly it’s better to bring up children than to expend all one’s nervous energy in making paintings, but what can you do, I myself am now, at least I feel I am, too old to retrace my steps or to desire something else. This desire has left me, although the moral pain of it remains…

Wishing you luck and good heart and relative prosperity, please tell Mother and Sister sometime that I think of them very often, besides this morning I have a letter from them and will reply shortly.
Handshakes in thought.

By the end of the month, he will be dead.