365 Days of Art: July 16 – Gorky Physically Confronts Matta, and His Wife Leaves Him 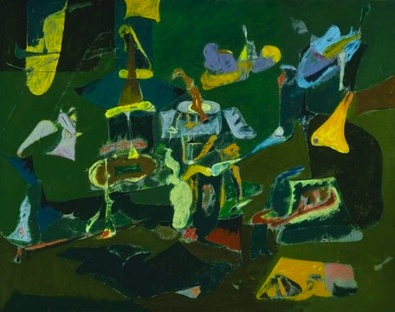 Arshile Gorky physically confronts Matta over sleeping with his wife Agnes (aka Mougouch), and she leaves Gorky on the advice of his own doctor.

The morning after a huge fight, Gorky’s wife initially thinks they’ve cleared the air. She writes a letter to Matta to let him know that Gorky knows about their affair, then drives to New York with her husband and children for various medical appointments.

After her doctor’s appointment, Agnes calls Matta and learns that Gorky has just chased him through Central Park trying to beat him with either a stick, or his cane. Matta also relays to her his suspicions that that Gorky is insane, based on Gorky having compared him with Josef Stalin and other things he’s said in anger. He tells Agnes to talk to Gorky’s own doctor about his behavior. Based on the doctor’s advice, she takes the children and flies to her parents’ home in Virginia, leaving Gorky.

I told him [Dr. Weiss] everything. I told him I’d had a two-day fling [with the artist Matta] and that Gorky had discovered it… he [Dr. Weiss] said ‘I’ve been watching him and he’s been going down under.’ He said he had seen it in Gorky’s painting. Gorky was ‘sinking into darkness…’ Gorky was insane… Dr. Weiss said, ‘Yes, I found Gorky very disturbed. He’ll beat you up. He’ll kill you all. It’s very dangerous and I have to save the lives I can save. I’m sending you to your mother’s. I’m going to call up the airport and get you and the children tickets.'”