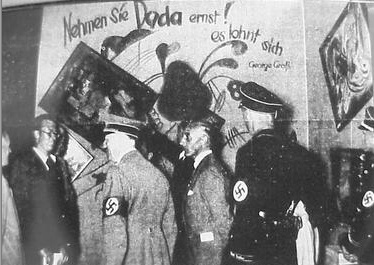 Hitler opens The Entartete (or Degenerate) Art Fair in Munich with an enraged speech about the “great and fatal illness” of art, while the exhibition itself is designed to invite public mockery of “garbage”. The show features over 650 artworks and books, culled from a cache of about 16,000 works stolen from the collections of thirty two German museums.

The exhibition is pure Nazi propaganda, and they use every trick at their disposal to advance their agenda. They create a physical space that is deliberately uncomfortable for viewers, forcing each of the two million visitors to climb a narrow staircase, and to bump into a large sculpture of Jesus as they enter. The rooms are crowded with temporary partitions, and are deliberately chaotic and overfilled. Artworks are hung amateurishly with cord, and crowded on a wall, sometimes unframed.

Slogans painted on the walls include:

Many wall labels indicate the purchase price paid by museums, designed to inflame the fiscal decency of regular German folks. The perpetrators of these tricks and “garbage” are frequently identified as Jewish-Bolshevist, although only six of the 112 artists in the exhibition are actually Jewish.

To no one’s surprise, the exhibition generates no sales–who would want to buy art that’s already been labeled as “garbage” by the state? After the premiere in Munich, the exhibition travels to eleven other cities in Germany and Austria. 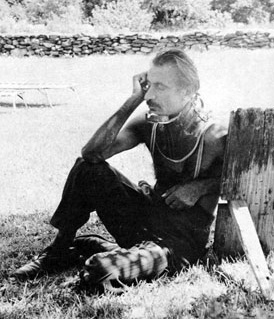 Arshile Gorky returns to his home in Sherman, Connecticut, driven by Isamu Noguchi, as well as Wilfredo Lam and his wife Helena. On the way, Gorky asks to stop to see Dr. Weiss, his psychiatrist. When he gets back in the car, he tells Noguchi that the doctor wants to perform a lobotomy on him.

Wilfredo Lam takes photos of Gorky, but what sticks in Helena’s mind are two old, black rag dolls, belonging to his daughters, that Gorky keeps squeezing in his hand, and the fact that his right arm hangs dead at his side.

When they make a stop at the local store in Sherman, Gorky buys candy for his girls, and Helena buys chocolate for herself. Gorky blocks her attempt to pay for both of them by saying:

Helena, what does it matter who pays? Nothing matters anymore, soon all will be over anyway.”