365 Days of Art: July 2 – Van Gogh Visits Girlfriend in Hospital After Birth of Her Baby 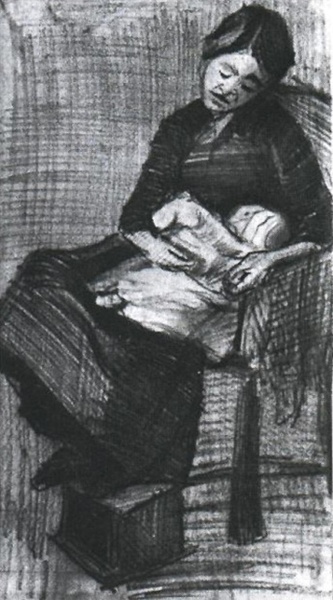 Vincent van Gogh visits his figure model and girlfriend, Sien, in the hospital, after the birth of her baby (Vincent is not the father). He writes to his brother Theo about how beautiful the baby is, and of his great joy at meeting him. But he sounds an ominous note when he reflects on his own mental illness:

But the sombre shadow still threatens, and the master Albrecht Dürer knew that when he placed Death behind the young couple in the wonderful etching you know. But we must hope that the sombre shadow remains only a shadow that will pass.”

In a particularly bittersweet passage, Vincent writes: “Well brother, you have it on your conscience that I’m so happy today that it made me cry.”

After about two years together, Theo convinces Vincent to leave Sien, who is a prostitute, cleaning woman, and self-described “whore”. This is the only domestic relationship that Vincent will ever have, outside of living with his family. Although Sien later marries, she eventually commits suicide by drowning herself in a river.