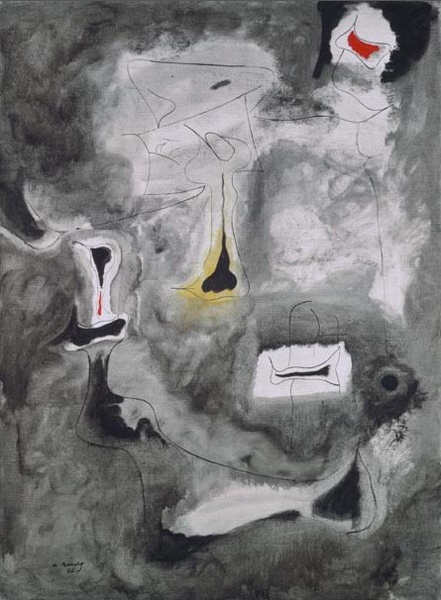 Arshile Gorky removes his neck brace and hangs himself in a shed near his home, after writing “Goodbye My Loveds” on a wooden crate nearby. His barking dog leads searchers to his body.

Gorky regularly uses the the words “beloveds” or “loveds” to refer to anything close to him–friends, family, and paintings. After the fire in his Sherman studio in January, 1946, he paints an homage to works lost in the fire, naming two of his paintings Charred Beloved I and Charred Beloved II.

I think Gorky is saying good-bye to his friends, family, and his work. Maybe even his dog.

There’s no doubt he lived a hard life, more than most people could bear. He fled Armenian genocide as a teenager, had his work harshly criticized, lost much of his work in a studio fire, was diagnosed with cancer and lived with a colostomy bag, was injured in a car crash that left him in a neck brace and his painting arm all but useless, his wife had an affair with one of his best friends and left him, and his psychiatrist wanted to give him a lobotomy. Even little things that could go wrong, did: his dealer forgot to mail invitations to his art opening, and so no one came. And after his death, 15 paintings were destroyed in a plane crash.

Gorky and his tragedies have been a theme of my blog this year. My heart has gone out to him every time, even while laughing at the absurdity of calling his work “worse than an Atlantic City hangover” or feeling pissed on his behalf at the dealer who forgot to mail the invitations. This guy somehow invited tragedy, and most of us feel like that at one time or another, when everything–big and small–just piles on.

A contemporary artist named Aram Jabilian has made a series of works that investigate Gorky and this air of sadness, the in-betweenness that he lived with. As an immigrant, as someone who felt he didn’t belong, as someone who was in a state of limbo with regards to his marriage and his health–watching them deteriorate while waiting for them to get better. It’s said that Gorky’s ghost has appeared to residents of his old home in Connecticut, and the work deals with that too. The work itself is haunting and sincere, the way I think Gorky was haunted but sincere in life. There’s a nice article that includes an interview and images that’s definitely worth reading.

I’ve said it so many times, but poor guy.