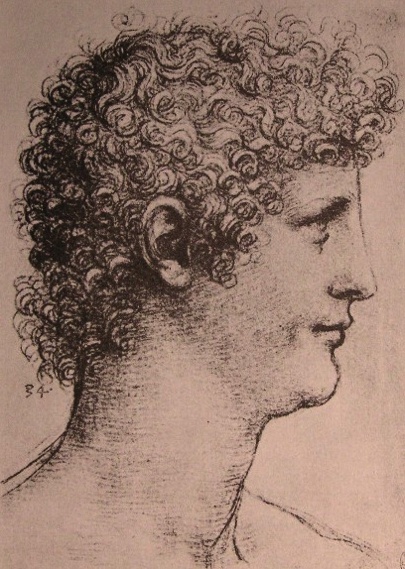 Leonardo, drawing thought to be Salai

Leonardo writes in his diary about a young assistant nicknamed Salai (“the devil” or “the little unclean one”) joining his household:

Giacomo came to live with me on St. Mary Magdalene’s day [22 July] 1490, aged ten years. The day I had two shirts cut out for him, a pair of hose, and a jerkin, and when I put aside some money to pay for these things he stole the money (4 lire) out of the purse; and I could never make him confess although I was quite certain of it. The day after I went to sup with Giacomo Andrea, and the said Giacomo supped for two and did mischief for four, for he broke three cruets and spilled the wine.”

Leonardo includes many other descriptions of Salai’s misadventures, such as stealing money from other servants, and selling Leonardo’s leather to a cobbler so he can buy candy. Leonardo has difficulty keeping him out of prison as he gets older, but he never gives up on him. Leonardo even arranges a dowry for Salai’s sister, and mentions him in his will. One last thing: a page in Leonardo’s sketchbook, which is not in Leonardo’s handwriting, depicts a sketch of an anus that’s captioned “Salai’s bum”. “Salais’s bum” is being chased by penises with legs. (!) For all of these reasons, art historians have wondered if Salai and Leonardo are involved romantically.