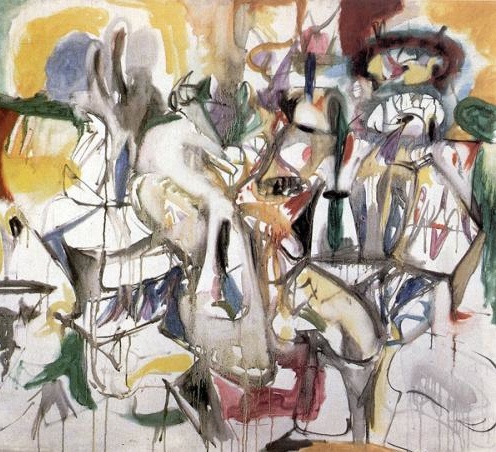 Arshile Gorky, How My Mother's Embroidered Apron Enfolds in My Life, 1944

Arshile Gorky is seriously injured in a car accident, after gallery owner Julien Levy loses control of his car. The car skids on the rainy road, plummets down a hill and turns over. The impact breaks Gorky’s neck and collarbone, and he spends more than a week at the hospital, in traction. Besides the pain of his injuries, his colostomy makes him extremely uncomfortable. When his wife Agnes (nickname Mougouch) arrives at the hospital, she is stunned at his condition. (Remember that he and his wife have been having serious marital difficulties, and she’s had an affair just days ago. To get out of the house, Gorky has spent the day with Levy and his wife).

He was in traction and he was completely berserk. They had to set his collarbone but when he got back up he discovered that his right arm was completely awful. I guess the nerves of the right arm had gotten messed up somehow, and his arm was semiparalyzed. He couldn’t lift it. So he saw this blackest despair. The nurses all said he was impossible: ‘You’ll have to take him home,’ they said… He won’t let us do anything to him.’ They wanted to give him an enema. He refused… Gorky couldn’t take it – this state. He couldn’t bear being in traction with a colostomy…”

Julien Levy’s wife, Muriel, would later say about Gorky, and this is what I think too:

To go through the path life took him, with all its pain, ordeals and nightmares… you’d have to be a saint to survive those things.”

My heart really goes out to the guy.