365 Days of Art: June 5 – Felix Partz Dies of AIDS; Is Memorialized in Photo 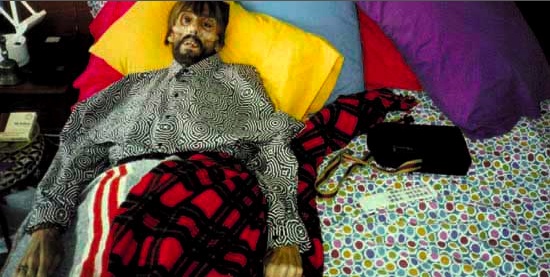 Artist Felix Partz dies of AIDS, and his collaborator AA Bronson documents the event in a heartbreakingly grotesque photograph. This is a real photo–even if it looks staged, or like a drawing based on a photograph–that shines light on AIDS, if only because it’s so hard to wrap your head around. Bronson says:

I made this photograph of Felix a few hours after his death. He is arranged to receive visitors, and his favorite objects are gathered about him: his television remote control, his tape-recorder, and his cigarettes. Felix suffered from extreme wasting, and at the time of his death his eyes could not be closed: there was not enough flesh left on the bone.

Felix and Jorge and I [members of the Canadian artistic collaboration General Idea] lived and worked together from 1969 until 1994. This communal life ended when Jorge died of AIDS on February 3, 1994. Felix followed shortly after, on June 5, 1994…”