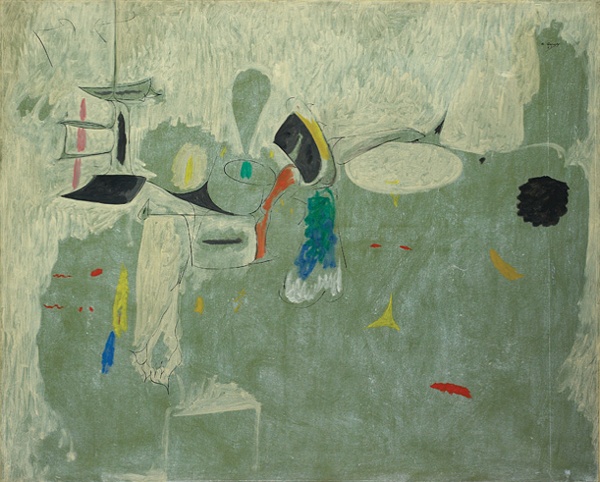 Arshile Gorky, The Limit, oil and paper on canvas, 1947

American Airlines Flight 1 crashes in Jamaica Bay, Queens about two minutes after takeoff. Ninety five people and fifteen abstract works by Arshile Gorky are aboard, all en route to Los Angeles. All crew and passengers are killed. The artwork, on its way to an exhibition is LA, is destroyed.

This is the plane crash that killed Pete Campbell’s father in Mad Men. When I saw the episode, I felt like it was a little over the top, too soap opera-esque, but several prominent people actually were killed in the real-life crash, including a close friend of President Eisenhower’s, a gold medal winner, and the mother of Linda Eastman, who would go on to marry Paul McCartney.

And poor Gorky. Although the crash happened long after his death, misfortune and tragedy had a way of finding him. This wasn’t even the first time his work was accidentally destroyed: on January 26, 1946, a fire in his Connecticut studio ruined about 20 paintings.

Time traveling back to 1914, March 1 is also the day that a teenaged Gorky and his sister arrive in Watertown, Massachusetts to settle with relatives. They are refugees, fleeing the genocide of ethnic Armenians in their native Turkey.

Gorky tragedies will show up more than once this year.