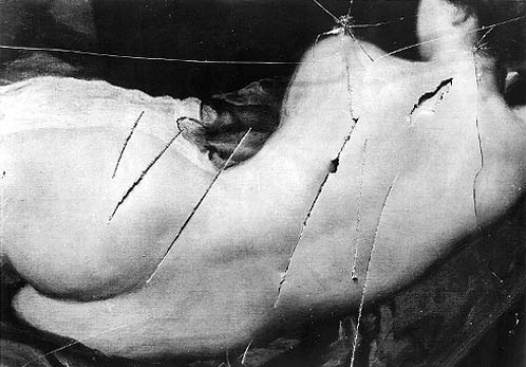 Suffragette Mary Richardson slashed a Velázquez painting at the National Gallery in London, in revenge for the arrest of a fellow suffragette the day before.

The painting was The Rokeby Venus (now titled Venus at the Toilet). Richardson grabbed what the newspaper called a “meat chopper” from under her cloak, smashed the glass within the frame of the picture, and, before anyone could stop her, cut the canvas seven times. She was arrested immediately, since a police officer was in the room at the time.

This was at least Richardson’s fifth arrest on behalf of the suffragette movement, but the Velázquez vandalism was the most publicized. In court, Richardson announced, “I think it a shame I had to consider it my duty to do it”.

It seems like most art vandalism is very individual: one person has their very particular reasons (as crazy as they might be) for harming the art (see: Little Mermaid, part 1 and part 2 and Connecticut art slasher). Or, if it’s part of a protest, it seems to be a one-time statement (see: Vietnam War protest, 9/11 conspiracy statement). However, Richardson’s vandalism was part of a carefully orchestrated plan to draw attention to the suffragette movement. Sylvia Pankhurst, the woman whose arrest the day before prompted Mary Richardson to act out in the National Gallery, described the fruits of the movement’s labors:

The destruction wrought in the seven months of 1914 before the [First World] War excelled that of the previous year. Three Scotch castles were destroyed by fire on a single night. The Carnegie Library in Birmingham was burnt. “The Rokeby Venus”…was mutilated by Mary Richardson. Romney’s “Master Thornhill”, in the Birmingham Art Gallery, was slashed by Bertha Ryland, daughter of an early Suffagist…numbers of other pictures were attacked, a Bartolozzi drawing in the Doré Gallery being completely ruined. Many large empty houses in all parts of the country were set on fire…Railway stations, piers, sports pavilions, haystacks were set on fire. Attempts were made to blow up reservoirs. A bomb exploded in Westminster Abbey, and in…St George’s [Church]…, where a famous stained-glass window from the Malines was damaged … One hundred and forty-one acts of destruction were chronicled in the Press during the first seven months of 1914.

It’s almost gleeful, which creeps me out. I like to create things, not destroy them. Even if it’s for a good cause.

The Rokeby Venus is the only surviving female nude by Velázquez (he was known to paint only three). Nudes were extremely rare in 17th century Spanish art, because the Spanish Inquisition actively monitored artists’ activities. However, nudes by foreign artists were more acceptable, and were avidly collected by members of the Spanish court and displayed in their homes.

Unlike some of the other art targeted by the suffragettes–like that poor, ruined Bartolozzi drawing–The Rokeby Venus was able to be fully restored and returned to display.