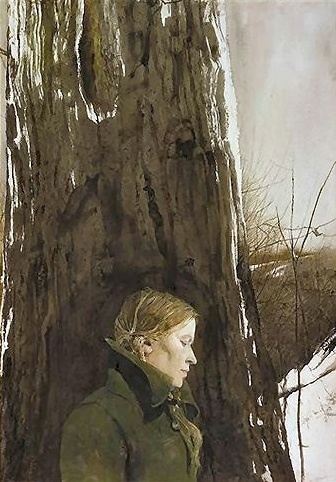 Art collector Leonard E. B. Andrew drives to Andrew Wyeth’s studio in Chadd’s Ford, PA, at Wyeth’s request, and is the first outsider to see Wyeth’s many drawings and paintings of his neighbor and model, Helga. The body of work came to be known as the Helga Pictures.

Andrew had previously bought six works of Wyeth’s. Wyeth and his wife left Andrew alone to peruse in private. “I assumed THEY assumed I was a serious collector and that the invitation was strictly a collector’s opportunity to see something no one else had seen”.

He describes climbing the stairs to the studio that day, opening the door and seeing over 200 different drawings and paintings, of the same woman, stacked on tables, leaning against walls, and generally filling every available space.

I spent two hours looking at the collection and trying to absorb what I was seeing. Just the idea of having a private look at the unseen personal collection of a major international artist, 240 drawings and paintings of one subject, executed and stored over a fifteen-year period, was mighty heavy for this simple collector.

The revelation of this secret body of work made an international splash because the exact nature of Wyeth’s relationship with Helga was unknown, and still is. Some people caught a hint of scandal because Wyeth kept the paintings secret from his wife for many years. Anderson ended up buying the entire collection and unusually, the copyrights too.