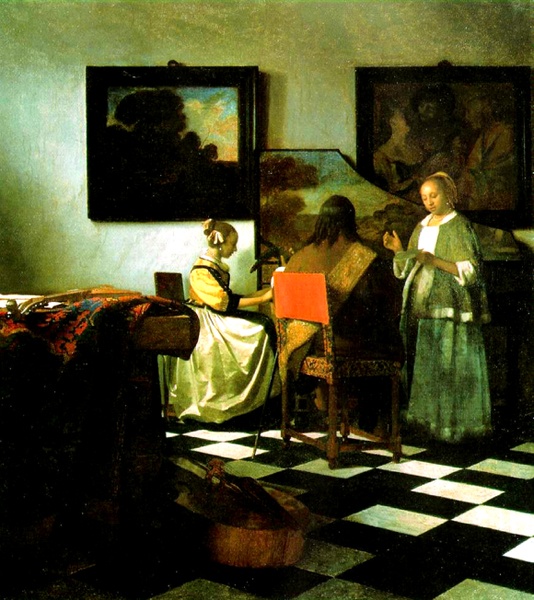 The Concert, by Johannes Vermeer

March 18, 1990
The largest art robbery in history occurs at the Isabella Stewart Gardner Museum in Boston, where 13 paintings valued at $100 million are stolen.

Disguised as Boston police officers, the two thieves claimed to be responding to a call. In Boston, in the early morning hours of St. Patrick’s Day celebrations, this sounded pretty damn plausible. The guard on duty allowed them entry through the Museum’s security door, though this was contrary to museum practices. Once inside, the “officers” claimed that they recognized the guard from an outstanding warrant, and asked him to step out from behind his desk. Sincerely trying to correct what he thought was a misunderstanding, the guard walked away from the desk–and the only alarm button in the museum.

The poor guy was told to summon the other guard on duty, which he did. They were both taken to the basement, where the thieves separated them from each other, handcuffed them to pipes, and then duct taped their hands, feet, and heads.

They were discovered the next morning by a third guard who was arriving for his regular shift.

The stolen works include: Rembrandt’s Storm on the Sea of Galilee (1633), A Lady and Gentleman in Black (1633) and an etching entitled Self Portrait (1634); Vermeer’s The Concert (1658–1660), (one of only 34 known works by Vermeer in the world); Govaert Flinck’s Landscape with an Obelisk (1638); and a Chinese vase or Ku, all taken from the Dutch Room on the second floor. Also stolen from the second floor were five works on paper by the Impressionist artist Edgar Degas and a finial from the top of a pole support for a Napoleonic silk flag, both from the Short Gallery. Edouard Manet’s Chez Tortoni (1878–1880) was taken from the Blue Room on the first floor.

To this day, several empty frames hang in the Dutch Room gallery, both in homage to the missing works and as placeholders for when they are returned. Experts are a bit puzzled by the selection of works, since the thieves had to pass by a far more valuable Botticelli, for example, to approach a flagpole finial.

The Museum continues to actively investigate any and all leads related to the theft. This ongoing investigation is in cooperation with the FBI and the US Attorney’s Office. The focus of the investigation today is on the return of the artworks, to the extent that the Museum publicly requests the thieves or accomplices to conserve them at proper temperatures and humidity levels. The Gardner Museum offers a reward of $5 million for information leading to the recovery of these works in good condition and ensures complete confidentiality.

The Gardner Museum issues a press release saying, “It’s time for these paintings to come home”. This is part of a larger campaign to advertise the reward and confidentiality policy. They state that they believe they know the identity of the thieves and just want to make the museum whole again, with the safe return of the artworks. The FBI says that a criminal organization running through Connecticut (?) and Philadelphia is implicated.

Fun Fact: The theft is the subject of several novels and TV plots, including Irreplaceable (2009) by Charles Pinning, The Art Forger by Barbara A. Shapiro, and a recent episode of Blacklist. In The Art of the Heist: Confessions of a Master Thief, convicted thief and professional ne’er-do-well Myles Connor kinda-sorta confesses to the crime.