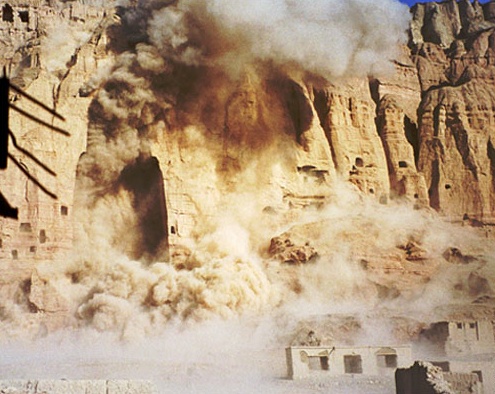 The Buddhas of Bamiyan, two 6th century statues of Buddha carved into a cliff in Afghanistan, were dynamited by the Taliban. The total demolition was effected in stages, and took several weeks to complete.

I remember the awful anticipation of the clock ticking down on this one. I, and all my friends in the art world, kept hoping that someone would step in, or that they would call it off at the last minute. I remember being at my desk at work and reading online that the demolition had begun; there was a sad little pit in my stomach.

I was at that same desk six months later when the Taliban brought down the World Trade Center.

The main bodies were cut directly from the sandstone cliffs, but sculptors constructed armatures from wood, and added details like the faces and robes were modeled in mud mixed with straw, coated with stucco and painted. It’s believed that the faces may have been masks. Unlike the stone, the more fragile materials couldn’t stand up to the elements and have been lost to time.

Bamiyan lies on the Silk Road, a caravan route linking the markets of China with those of the Western world. It was the site of several Buddhist monasteries, and a thriving center for religion, philosophy, and art. Monks at the monasteries lived as hermits in small caves carved into the side of the Bamiyan cliffs. Most of these monks embellished their caves with religious statuary and elaborate, brightly colored frescoes. Until it was completely conquered by the Muslim Saffarids in the 9th century, Bamiyan shared the culture of Gandhara.

Before being blown up, they were the largest examples of standing Buddha carvings in the world. They are believed to have been built by the Kushans, with the guidance of local Buddhist monks, at the heyday of their empire. They were perhaps the most famous cultural landmarks of the region, and the site was listed by UNESCO as a World Heritage Site along with the surrounding cultural landscape and archaeological remains of the Bamiyan Valley.

Some interesting history: In 1996, a Taliban commander operating in the area announced his plans to blow up the Buddhas and went so far as to drill holes in the Buddhas’ heads in order to plant explosives. Mullah Omar specifically ordered him to stop and in 1999, Mullah Mohammed Omar publicly came out in favor of preserving the Buddhas. He stated: “The government considers the Bamiyan statues as an example of a potential major source of income for Afghanistan from international visitors. The Taliban states that Bamiyan shall not be destroyed but protected.” In early 2000, local Taliban authorities asked for UN assistance to rebuild drainage ditches around tops of the alcoves where the Buddhas were set.

Concurrently, radical clerics began a campaign against “un-Islamic” segments of Afghan society. The Taliban soon banned all forms of imagery, music and sports, and television, in accordance with their strict interpretation of Sharia law. 400 religious clerics from across Afghanistan then declared the Buddhist statues against the tenets of Islam. Mullah Omar changed course and ordered their destruction, supposedly on direct orders from Osama bin Laden.

Initially, the statues were fired at for several days using anti-aircraft guns and artillery. This caused severe damage, but did not obliterate them. During the destruction, Taliban Information Minister Qudratullah Jamal lamented that, “this work of destruction is not as simple as people might think. You can’t knock down the statues by shelling as both are carved into a cliff; they are firmly attached to the mountain.” Later, the Taliban placed anti-tank mines at the bottom of the niches, so that when fragments of rock broke off from artillery fire, the statues would receive additional destruction from particles that set off the mines. The Taliban also lowered men down the cliff face and placed explosives into holes in the Buddhas. After one of the explosions failed to completely obliterate the face of one of the Buddhas, a rocket was launched at the head.

A Taliban ambassador has said that the destruction of the statues was carried out in response to an offer from Sweden to restore the statues’ heads. The ambassador reportedly said: “When the Afghan head council asked them to provide the money to feed the children instead of fixing the statues, they refused and said, ‘No, the money is just for the statues, not for the children’. He did not comment on the claim that a foreign museum offered to buy the Buddhist statues, the money from which could have been used to feed children.

Despite the fact that most Afghans are now Muslim, they too had embraced their past and many were appalled by the destruction. Saudi Arabia and the UAE, both of whom recognized the Taliban government, condemned the destruction as “savage”. Japan and Switzerland, among others, have pledged support for the rebuilding of the statues.

Swiss filmmaker Christian Frei made a 95-minute documentary titled The Giant Buddhas on the statues and reactions to their destruction.