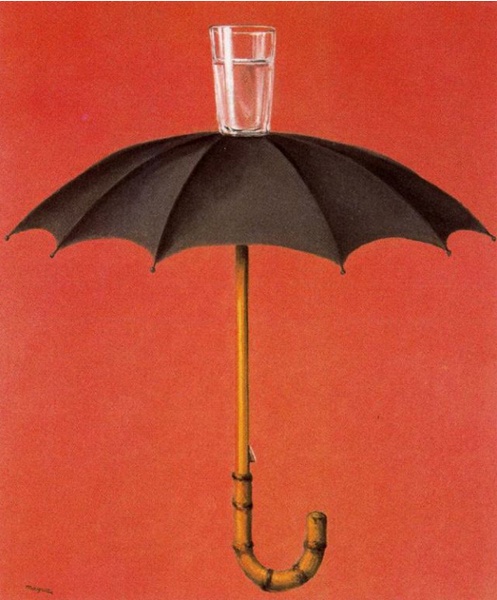 Magritte writes a letter to his friend Maurice Rapin, explaining the inspiration for Hegel’s Holiday:

My latest painting began with the question, How do you paint a picture whose theme is a glass of water? I drew numerous glasses of water etc. There was always a line in these drawings. Then, the line flattened itself and took the form of an umbrella. Then, this umbrella became contained in the glass and then opened and hung itself under the glass of water. This seemed to me to answer the initial question. The picture is called “Hegel’s Holiday”. I think that Hegel would be pleased with this object that performs two opposing functions: both repelling and containing the water. Maybe this would have entertained him, as so often happens on holiday?

[I translated this from a Spanish book I got at a Magritte exhibition in Madrid; the letter itself is almost certainly translated from the Belgian Magritte’s native French, so I hope it’s OK!]