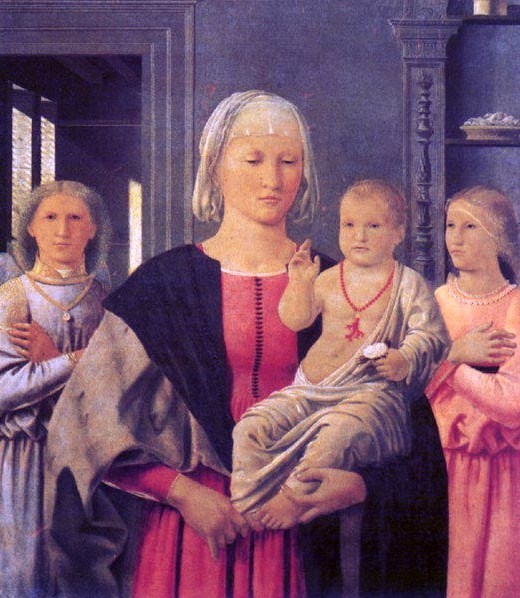 Italy’s Art Squad runs an undercover sting and recovers three Renaissance masterpieces stolen the year before from the Galleria Nazionale delle Marche in the Ducal Palace in Urbino.

The theft, of Piero della Francesca’s Senigallia Madonna, another Piero called The Flagellation of Christ, and Raphael’s The Mute Woman occurred on February 5, 1975. Thieves used scaffolding on the outside of the building to assist in scaling 12- to 15-foot walls, then broke windows and used false keys to get inside what was then considered a well-secured museum. However, at that time, like most museums, the Palace didn’t have an electronic alarm system, or sophisticated security patrols. Guards made rounds only every two hours, giving the thieves plenty of time to do their work, removing the paintings from their frames and leaving those behind, before the thefts were discovered.

Fast-forward a year, and the Art Squad receives information from a Roman antiques dealer that leads them to Switzerland. Posing as wealthy buyers, they set up a meeting with the suspects which never takes place, but putting the information together, they discover the paintings in a hotel room in Locarno. Four people are arrested in Italy, Germany and Switzerland and the paintings are returned to Urbino within the week.

Italy’s Art Squad was formed in 1969 to protect Italy’s artistic heritage. The squad fights art theft and forgery, as well as illegal archaeological excavation. It was the first in the world dedicated exclusively to art crimes. It now has over 280 officers and works internationally with INTERPOL and UNESCO to protect, document, and find stolen works. Since its inception, the Squad has rescued approximately one million archaeological objects from the black market, recovered more than 500,000 stolen works of art and seized close to 300,000 forgeries.

If you know anything about Italian police, you know that they have their own special well-designed uniforms, so they’re certainly entitled to be called the crime-fighting superheroes of the art world.