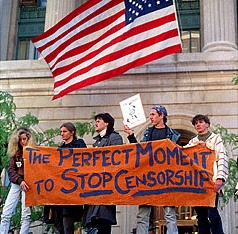 With funding for the arts under direct attack by conservative politicians, a coalition of arts groups met to strategize on how to proceed.

Trouble had been brewing ever since an exhibition of Robert Mapplethorpe photographs, called The Perfect Moment, debuted four years earlier. The exhibition was funded by the National Endowment for the Arts. Outrage over the homoerotic content (and, I think fear of AIDS and generalized homophobia) led to cancellation of some venues for the show, an obscenity lawsuit, and lots of hand-wringing on both sides of the issue. And lots of press. The controversy expanded to include other artists, and continued to grow as it was fed by rhetoric from presidential candidates in the election year coverage.

The month before this symposium, in February 1992, NEA chairman John E. Frohnmayer was forced to resign. The week before, presidential candidate Pat Buchanan announced that, if elected, “I’ll go down to the [NEA], shut it down, padlock it and fumigate it.”

These attacks on the arts in the mainstream, as well as pending legislation (in Massachusetts of all places!) forbidding the fictional representation of religious figures (this, just three years after the fatwa issued against author Salman Rushdie was widely criticized by Americans) struck fear into the hearts of artists. Especially since Buchanan had some traction in the primary elections, there was real concern that his extreme view might be adopted by other candidates.

I’m not sure the artists helped their cause by burning a cross in between conference sessions. But it’s an important discussion to have, and one we’re still having today.